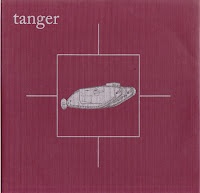 Residing on the aggro end of the post-hardcore continuum, Colorado's Tanger undeniably put the "power" in power trio, with roiling, barreling delivery bearing all the subtlety of a steamroller.  These guys owed a huge sonic debt to the likes Hoover, Thumbnail, Helmet, and to a lesser extent Jawbox.  By and large the two numbers on this wax speak for themselves, but there's a bona fide technical finesse to them that shouldn't be overlooked either.  The back cover lists three songs: A. Landmine, B. Gary, AZ & C. Balance, but only the latter two occupy this record, with "Landmine" functioning as the single's encompassing title.  Confused the hell out of me at first.  In 2000 Tanger released a self-titled album on Owned & Operated Records.

I was on Owned & Operated's promo list for about two months, and the Tanger CD was one of the things they sent. I remember thinking it was pretty good, though I don't have it anymore.

Are you sure this single is from '86? If it's the same Tanger, I'm not sure if they would've released a 7" that early...

...actually 1996. Thanks for catching the error. Time to do some brief editing, eh

gents... I'm one of the Jason's from Tanger. I'd be happy to send you both a copy of the record (specify CD/LP) we did plus a couple of the other songs we recorded for our new record and a comp that never saw the light of day. PM me..