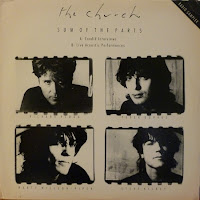 This one is pretty self-explanatory for a change.  Sum of the Parts was put to together by Arista Records in conjunction with The Church’s 1988 breakthrough album, Starfish, ostensibly for radio promotion.  Side one features individual interviews with all four band members, including the now elusive Richard Ploog who would depart the group after the Church’s follow-up to Starfish, Gold Afternoon Fix, released in 1990.  Commercially speaking, it was all downhill from here, but GFA proved to be the stronger of the two records.  While not terribly revealing, the boys are nonetheless candid with the two Gavin Report interviews assigned to the case.  Side two features three acoustic Starfish songs, including the forever played-to-death “Under the Milky Way,” which might as well be “Stairway to Heaven” or “Imagine” at this point if you ask my calloused eardrums.  I’m fairly certain these same takes also appeared on the double CD reissue of Starfish, but my rip is straight from the vinyl.

Gold Afternoon Fix stronger than Starfish? I think the band would disagree with you quite strongly.

I've never tired of hearing "Under the Milky Way," personally, but I know what you mean, especially since it's become a favorite for advertisers and soundtracks.

Totally agree with Michael. And I'll add that it wasn't downhill because the album right after Gold Afternoon, Priest = Aura, is probably even better than Gold. Some folks think the last few Church albums are better than the 90's, but I really dig what they did right through that decade. Anyway, thank you so much for posting this! I'm very curious about the interviews.

Yeah, I'm in agreement with you guys. I especially think that Priest=Aura was one of their great albums during that time period.

Could I ask for a reup? I would love to hear this interview.
Thanks much

i just updated the link.

Thank you so so much !

any chance of reuoing this one please?