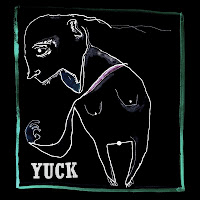 SXSW season is upon us again, and one UK buzz band that I'm sure is drawing significant flocks in Austin is Yuck.  Released just one month ago, the band's debut has garnered a lot of "throw back" accusations, with some quick to assimilate them with such vintage SST Records stablemates as Dinosaur Jr. and Sonic Youth.  Lazy, but semi-accurate comparisons.  Having absorbed that album many times in recent weeks, I believe some more obvious inspirations point to Pavement, Seafood, and Catholic Education-era Teenage Fanclub.  Yucks most charismatic entries, particularly "The Wall," "Georgia" and the tuggingly bittersweet "Get Away," appear in it's first half, before things gradually start to unravel by album's end into a slow, albeit tolerable malaise.

Nonetheless I was interested in hearing some of the Yuck's pre-album demos that made them such a hot commodity to begin with.  Among these six songs, I can only confirm that "Georgia," "Sunday," and "Suicide Policeman" are bona fide demos.  The three songs preceding them (possibly derived from singles) depict Yuck in a much less hazy light.  "Weakend" and  "Daughter" are downright lucid in fact, subscribing to the same austere formula Band of Horses took to the bank.  At any rate, whether you've heard the album or not, make of these what you will.

I just heard them on the radio and thought of you. Well, of this site anyway, since I don't know who you are.

I like that bands like this are even getting attention (or even listened to). The album is good, though it has a demo quality to it so I am curious about these recordings which are more "demo" quality.

Hey Jeffrey. Glad to see Kickbright is back, at least in some capacity. Should be fun.

i saw this and thought you would dig it...would love to see you post some mp3s if you've got 'em

I'm turning into a Yuck fanatic. And I have a question for you. How are these supposed to be demos when five of the six songs are identical to the versions that were released? The only one that I think is a true demo is "Sunday". The first three are off the Yu(c)k Weakend EP.

With that said, Yuck is amazing. Everyone should check out their B-sides "Coconut Bible", "Doctors in My Bed" and most of all "Cousin Corona".