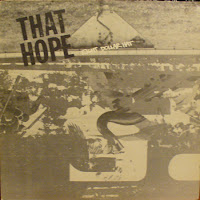 That Hope were a rather crooked, post punk-nik quartet presumably hailing from Bloomington, IN, but it's hard to believe they were even from the same planet as John Cougar Mellencamp, let alone the same region of the country.   Eight Dollar Hat is hard a one to generalize, but throughout it's ten off-kilter cuts you are bound to detect trace elements of Pere Ubu, Gang of Four, Pil, and China Shop.  The album's more tuneful forays, like "Power of Speech," "Move By Me," and "John's Got the Goods," give it some genuinely strong staying power.  If you get the notion to, you can download a That Hope song that doesn't appear on this disk over at I Remember Dayton blog.

Thanks for this. I was going to IU in Bloomington, IN back in the mid eighties and I don't ever remember hearing about this band...but you never know.

Hi, I'm George Ludwig, the bass player form That Hope. Once in a while I search for the name just to see what's up, that's how I found this blog.

We also had a second album called Beating The Dumb Guy.

FWIW, I still play music, but it's nothing like That Hope: http://www.georgeludwigmusic.com