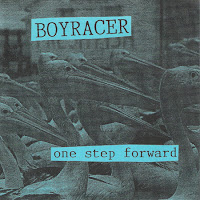 In the above title I note that this record is a Slumberland Records product, but technically this split single was released on an offshoot of the label, dubbed, I Wish I Was a Slumberland Record.  And the point was?  Truthfully I don't know why this wasn't designated as a proper Slumberland release, except perhaps that it was initially designed as a tour single (got mine through mailorder, so go figure).  As for the music in question, Wetherby, England's highly prolific Boyracer, an inescapable indie-rawk fixture throughout much of the '90s, were of little significance to this set of ears.  Despite my indifference at the time I have to give it up to them for their side of the coin, "One Step Forward," a distortion-laden slack attack with a chunky hook delivered with plenty of cranky persuasion. 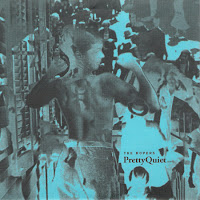 Ultimately, it was The Ropers who really lured me to this wax.  I previously shared another Ropers split single (w/ The Tribbles), and even after discovering these abettors of chiming indie pop nearly two decades ago, I'm still captivated by their brief catalog.  So far as I can tell, "Pretty Quiet" is exclusive to this release, a bit fuzzier and flange-heavy than even some of those great early singles they did for Slumberland in the early '90s, and definitely rawer than the relatively polished All the Time full length.

I could at least tolerate them...kinda like I could tolerate Nine Inch Nails.

IWIWASR was, i believe, for things that were strictly limited, one-time pressings. like their flexidiscs...

The Boyracer track is a cover, FYI. The original was by Even As We Speak. It was a 1991 Sarah single.

Thanks for shedding some more light on this record folks! Had no idea Boyracer's song was a cover. I like Even As We Speak, but wasn't familiar with this tune.

The only show I ever promoted were these 2 bands at Mr. Goodbar back in '94. Were you there?

Would a re-up be possible? Been looking for "Pretty Quiet" for a while now.

I am incapable of reading articles online very often, but I’m happy I did today. It is very well written, and your points are well-expressed. I request you warmly, please, don’t ever stop writing.