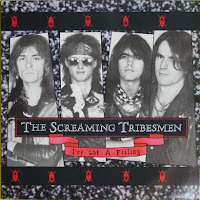 The 1988 Bones + Flowers album from Sydney, Australia Screaming Tribesman turned out to be one of my best posthumous finds in recent years.  I had heard of the Tribesman spoken of during the past couple of decades but never thought to investigate them until a cassette of the aforementioned LP fell into my hands.  Starting life out as a competent garage-rock troupe, loosley in the vein of their countrymen the Lime Spiders and Exploding White Mice, the Tribesmen hinted at some commerical potential, which was all but fulfilled by the time they had worked their way up to this ep, which largely served as a sampler for Bones + Flowers.  Though I don't recall it getting a shred of airplay, "I've Got a Feeling" edged it's way into the US modern rock top-10, and even topped the KROQ chart for a week or two.  Moreover, they were a mini phenomenom down under, where they tore up the indie charts for several years.

As it's been noted on Sons of the Dolls blog (which by the way is hosting a bevy of vinatge S/T wax), the Tribesmen resembled a more muscular Let's Active, at least during their late '80s tenure.  With some considerable roster shakeups, the band forged ahead into the '90s, albeit more intermittently.  That Striped Sunlight Sound recently shared the band's very scarce debut ep.

Update: Bones + Flowers has been reissued on Grown Up Wrong Records, which you'll find here.
Posted by spavid at 2:34 PM

Wow, does this bring back memories. Made a random purchase of Bones & Flowers on cassette in our ship's store while in the navy back in 1987 and wore the thing out. Thanks for this EP!

odd seeing this - i have a small collection of 3" cd eps, and one of them is the single of i've got a feeling. same cover as you show here, by the way.

Could you please take down as the band is doing re-issues of this stuff in a month.

The Tribesman are alive and well. They recently did a reunion show in Australia.