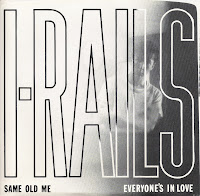 The I-Rails may be virtual unknowns to most of you, but the band who would eventually succeed them by the early '90s, Primitive Radio Gods, made a splash with the sample-heavy, alterna-pop hit "Standing Outside a Broken Phone Booth With Money in My Hand."  An appreciation for that loopy nugget isn't of any consequence when it comes to investigating frontman Chris O'Conners previous endeavor, the southern Cali based I-Rails, who traversed a far more linear path.  Alongside this stunning 45, which I'll comment on in a moment, the band was responsible for four albums (all cassette only from what I understand) with the final entry, Panharmonium arriving in 1990.  The I-Rails, particularly in their later years suggested the strain of power pop the Gin Blossoms would soon be serving to the masses, which while fairly conventional was far from a bad thing.

O'Conner's soaring pipes color "Same Old Me" with an ambitious flair, encroaching into Bono territory at times, but it's the doubly impressive b-side, "Everyone's In Love" that's the true keeper, evoking the punchy ebb and flow of latter-era Replacements and Dramarama.  I will be sharing the I-Rails' Panharmonium tape in the near future, but if anyone out there can help me out with the three preceding albums don't be a stranger.  A very special thanks to Chris for hooking me up with an original copy of this wax.

A. Same Old Me
B. Everyone's in Love

Wow! I don't think I've ever seen an I-Rails cover before... they've always been that mysterious band from Radio Gods' past that seemingly disappeared without a trace (at least according to the internet... There are, however, two really cool live videos from 1990 that popped up on YouTube!) Did you request this copy from Chris? - cause their tapes, etc. seem next to impossible to find without an inside source!

A little blurb of a page about the Radio Gods on ear.fm says the other I-Rails releases are Valentino Says, Unfocused and Nine Songs from Nowhere (also mentioned on Wikipedia). There's also the Primitive Radio Gods' original Rocket (as "Primative" Radio Gods) - labeled "black rocket" on the official site - which I gather is a demo of their first album. Do you have any leads on these? I look forward to your Panharmonium piece - keep up the awesome investigative work!

Yeah, I got the single from Chris. I think he only has about ten left! Look for the tape later this week. Wish I had a line on some of the other ones you mentioned.

How random i end up here...I just got their Discog last weekend from an online friend. PRG sent me the Same Old Me single on vinyl as well a couple years ago. They were slow getting an order to me, it was a nice gesture to hook me up on their own accord.

Looks like the file's been deleted "due to inactivity", according to the hosting site. Any chance of a re-up?

aaand last but not least? :)