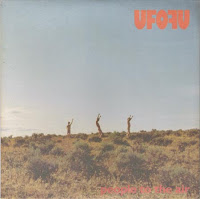 Someone mentioned the band UFOFU in response to my Study of the Lifeless post from last week. They didn't know it at the time, but brothers Ben and Brandon Curtis (exactly two thirds of UFOFU's roster) would eventually graduate from this struggling, short-lived band and go on to far bigger things in the Secret Machines. The rest as they say is history, but the contributions of this Denton, Texas (situated near Dallas) power trio, rounded out by singer/guitarist Joe Butcher, were quite significant in their own right. Nationally, they didn't quite generate the buzz they should have, but in northern Texas they were a favorite, performing with local yocals Tripping Daisy, Radish, and even The Toadies. UFOFU's cockeyed riff-rock had an eminently powerful bent to it, not merely attributed to a steady deluge of thick power chords, but Butcher's throaty, baritone vox - the element that sticks out the most for me. 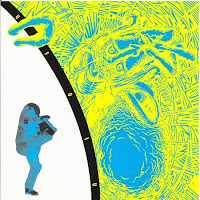 An excellent self-titled album was issued on the Medicine label in 1997, but preceding it were a handful of singles that were pretty worthy as well, starting with a four-song 7" ep recorded for Time Bomb Records, featuring early incarnations of LP ditties, "The Thing of it Is," "In a Chair in a Room," and "Pincushion Boy." Believe it or not, copies may still be available from Insound. Another pair of singles came to us courtesy of a Seattle label named Square Target who believed wholeheartedly in this little ol' band from Texas. A 1996 45 featured a cover of Built to Spill's "Car." Another 7" followed a year later, featuring the ace album cut "People to the Air" and an exclusive b-side. You'd be cheating yourself by not strolling over to UFOFU's Myspace page, where you can read a thorough bio and listen to songs not available on these singles. For an even greater appreciation of the band, may I direct you here. 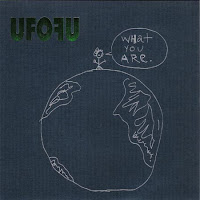 Hey, thanks for the post! I've got two or three unreleased songs somewhere around here, and I've also got their 10", which is pretty cool, and has a wonderful cover of The Stone Ponys' classic "Different Drum":

Thanks for the link Joseph. I didn't realize this 10" even existed. I think the Lemonheads covered "Different Drum" too.

I found a UFOFU 7" a couple of months ago that I never heard of previously. How many singles did UFOFU release??
http://www.discogs.com/UFOFU-Rephotographed/release/1995986

I used to own a UFOFU T-shirt - I'd love to know if there are any still floating around.

UFOFU played my club in the mid-to late nineties in L.A....they were a great band...been looking for some of their stuff to complete my collection. Could you re-up the link on this please?