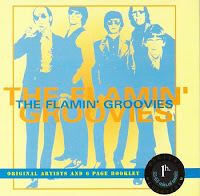 While I'm far from an authority on The Flamin' Groovies, I do have an appreciation for them, so when I saw this rather miscellaneous collection in a bargain rack at FYE a couple years ago, I laid my $4 on the counter and went for it. There were lots of familiar titles (which I'll get to in a moment) to entice me, but the cheap packaging and rather vague Members Only title reeked of unlicensed, sub-par alternate takes - and I was probably right about that first part. Essentially this is the Flamin' Groovies covering the Flamin' Groovies, ostensibly live in the studio, quite effectively at that. However, the author of the liner notes, in all his/her infinitive wisdom, completely leaves us in the dark regarding the circumstances of these recordings. No dates, no line-up info, pretty much nothing save for a concise bio of the band spread across three panels of the booklet. Here's the kicker - on this disk, bizarrely enough, the Groovies cover the Hoodoo Gurus 1985, Mars Needs Guitars track, "Bittersweet." If nothing else, it's inclusion is incriminating evidence that this "album" was cut in the '80s or sometime thereafter.


Even the usually thorough Allmusic.com fails to catalog Members Only in it's Groovies discography. So, does anyone know what the deal is with this set? Regarding the music within, there are some decent but not revelatory '60s covers of "Feel a Whole Lot Better," "Kicks," and "Shakin' All Over." Yes, there's a cavalcade of Flamin' Groovies classics, including "You Tore Me Down," "Teenage Head," "Slow Death," and of course the incendiary, genre-defining "Shake Some Action." Some real obscurities crop up here as well. It should go without saying these incarnations are no substitute for the originals, with the bountiful 1989 compilation Groovies Greatest Grooves being a more suitable starting point for young ears. Incidentally, the label that released this conundrum of a CD, hosts a series of similar collections by much more mainstream crooners and oldies like Bill Haley, Tommy Dorsey, Glenn Miller, Patsy Cline, and the list goes on and on and on...
01. Kicks
02. Bittersweet
03. I Can’t Hide
04. Shake Some Action
05. Slow Death
06. Teenage Head
07. Slow Death
08. Tallahassie Lassie
09. Shakin’ All Over
10. Somebody’s Fool
11. Feel a Whole Lot Better
12. In the USA
13. Ju Ju Man
14. Almost Grown
15. I’m Drowning
16. Babes in the Sky
17. You Tore Me Down
18. My Yada
19. Golden Clouds
20. Money
Hear
Posted by spavid at 6:18 PM

A great release again. I have not heard the Bucketful of brains song since i lost the flexi somewhere. Actually you have a fantastic release almost every time, it's a bit like christmas and I can play away on this new post and get to know a new band. You really do a great job. I only just found your blog and I visit every day and I am never disapointed. I have looked through the earlier posts and found great stuff so I'm building up a backlog here. However, an album I have never heard and only heard about has a dead link and I wonder, do you occasionally do reposts? I'd very much like to se "The Bats - How Pop Can You Get" Re-uped. Anyhow, thanks for your time and effort

totallyfuckedtoaddallthesefuckingfeaturesthatyoucannotgetridoff said...
This comment has been removed by a blog administrator.
October 15, 2009 at 12:54 PM

Well, mystery solved. Thanks Angelo! I wonder if any of those reissues you mentioned are still in print.

The Bats requested I pull How Pop... from my blog, as it has been reissued online (MP3 only). You can get it through Emusic, Amazon, and probably Itunes as well. Worth ever cent! Thanks for all the accolades!

Hey I found the listing at allmusic

According to the listing it was released in 2000, although as previously commented the tracks are from multiple sources.