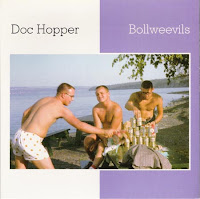 You are just a few clicks of the mouse away from hearing two of the best 1990s punk bands that in all likelihood never made it onto your radar. From the great state of Maine we have Doc Hopper, a thrashy popcore quartet that lasted a little over a decade, and as you might guess made nary a dent on the national scene, despite not being terribly removed stylistically than a band who's initials happen to be G.D. Big Drill Car and Husker Du also made quite an impression on them as well. I believe Hopper had three albums to their credit (Aloha, Ask Your Mom, and Zigs Yaws and Zags), a live split album with Weston, and yet another joint venture with New Jersey denizens El Secondhand, plus a plethora of singles. Their two cuts represented here are fairly quintessential.


The Bollweevils were a frantic power-punk trio hailing from the Windy City, who broke up in the late '90s, but have reunited sporadically for live gigs through much of this decade. Taking some serious cues from old school homeboys Naked Raygun and the Effigies, the 'Weevils rapid-fire salvos were on par with the tempo thresholds set by Bad Religion and 7 Seconds. A white-hot original, "Hit or Miss" leads their side off, and is quickly followed up by a cover of the Descendants undeniable cult classic "Silly Girl." I can't recommend the Bollweevils Stick Your Neck Out LP, and singles/rarities compilations, History of the Bollweevils Pts. 1 & 2, all issued courtesy of the one of the best indie labels of the '90s, Dr. Strange Records. Incidentally, the same label that released this wax, Ringing Ear Records was also responsible for issuing some of the New Sweet Breath 45s I compiled earlier this year.
Doc Hopper
01. Zapruder
02. Shortsheeted
Bollweevils
01. Hit or Miss
02. Silly Girl

good stuff! hey, do you happen to have any of those excellent Brainiac split 7"ers from back in the day? I had the ones with Bratmobile and Lazy but dunno what happened to 'em.

I've heard of the Groucho Marxists, but now I guess I have a reason to listen to them.

Sorry, no Brainiac splits to offer.

Cool to see this posted. I have DH's other 7" EPs, but never saw this one around. The "Zigs, Yaws and Zagz" album is rip-your-head-off-your-shoulders good. Alongside Doc Hopper, I've long had a thing for other under-the-radar bands of that period who were really fucking good, like Bracket, Zoinks! and Horace Pinker.