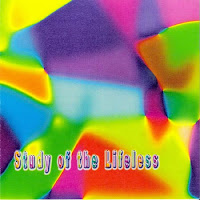 The bio on Allmusic.com pegs My Bloody Valentine as the influence of choice for this co-ed duo, but I'd argue it was Slowdive that was garnering more than a few plays in Study of the Lifeless' cd-changer. In fact, this self-titled debut is every bit as satisfying and impeccably crafted as Slowdive's ethereal, Just For a Day album. Shoegazer, dream-pop, atmospheric, however the hell you want to pigeonhole 'em, Study of the Lifeless are (or in all likelihood, were) masters of their craft, albeit a little derivative. There was a follow-up disk, The World Revolves Around You, which is yours for the taking here.

Honestly, I think this is more along the lines of what was going on at the time, with bands like Brian Jonestown Massacre, Experimental Aircraft, or a lot of the Clairecords scene. This record is awesome; I had it a long time ago, and it disappeared. Glad to discover it, and, more importantly, to discover other people liking it.

I might recommend to you the awesome Texas band the tomorrowpeople. They were around in the late 90s, toured with Tripping Daisy and Centro-Matic, and were a great band. they reformed last year, and also reissued their material. Speaking of Dallas, I might also recommend UFOFU, a great band

I actually have the Tomorrowpeople cd. Always thought they were a tad overrated, but I do like UFOFU a lot. I have their album and a bunch of singles which I might post later.

the tomorrowpeople's sole album fails to show their truly psychedelic side; the subsequent Marijuana Beach EP and the unreleased demos that were released last year almost sound like a different band. live, they were amazing!

Comet was another good Denton band as well; another is the Falcon Project.

Came across this today. Been in shoegaze mode a bit lately and this is just what i've been looking for. The blog is excellent... would never have come across some of this stuff otherwise. Keep up the good work, it's much appreciated.

How can you mention Dallas in the 90's and not mention pop poppins. They were phenomenal live. Thousands came out to their live shows on a Tuesday or any day of the week really. You should get a copy of Non-Pop Specific. Unlike most bands this CD sounds just like they did live. Their drummer was big reason for their success. He was in the Toadies, Course of Empire, Pleasure Club and now Better than Ezra. There are way too many lost bands from Dallas. Its a shame really that this band didn't get big. They would still be around.

Hello! I have fallen in love with this album. Would you please update the link again so I can download. Many thanks!

you can re-upload the link? Please please