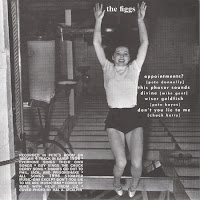 If you've been paying attention to our Splitting the Difference series, you'll notice that The Figgs have been previously featured - on the first occasion with Coffin Break, and now with Ohio's Prisonshake taking their turn on the flipside, only this time around, the Figgs offer four songs, all exclusive to my knowledge. And what of those songs you ask? Strikingly brief and lo-fi, compared to the rest of their repertoire, and not sounding particularly Figgs-y I might add. Even a rendition of Chuck Berry's otherwise rollicking "Don't You Like to Me" is given an ironically loungy treatment. Mightily enjoyable all the same, as are the three originals (each composed by a different member of the trio). 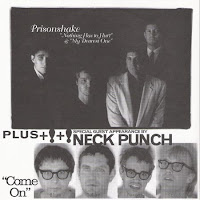 Rubbing elbows with Prisonshake's side of the other side of this wax is an outfit going by the name Neck Punch, who contribute an irreverent Berry cover of their own, "Come On." The Cleveland based Prisonshake are thoroughly adored in the hearts and minds of their humble but enthusiastic fanbase, pumping out a handful of overlooked, punked-up indie rock LPs during the '80s and '90s, but like the Figgs, they're relatively subdued here, namely on the 'ballad' "Nothing Has to Hurt." If only that notion were true...
The Figgs
01. Appointments?
02. This Phaser Sounds Divine
03. Wiser Goldfish
04. Don't You Like to Me
Neck Punch - Come On
Prisonshake
01. Nothing Has to Hurt/My Dearest One
02. answering machine blather

Funny how Neck Punch looks just like the Prisonshake guys with glasses on...

Hmmm. Maybe you're onto something Brushback...

Hi, can I request a re-up of this EP? I have a copy, but you make better vinyl rips than I do! Thanks from the bottom of the heart of a fellow Figgs fan.