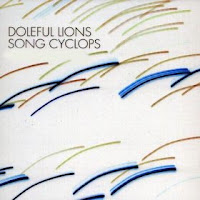 I've been a fan of the Doleful Lion's brand of crooked, Merseybeat-indebted pop for a good ten years or so now. A duo consisting of Robert Scott and Jonathan Scott (the latter being the ringleader), the Lions have yielded five proper studio albums and two compilations of 4-track home recordings, Song Cyclops Vols. One and Two, released in 2000 and 2006 respectively on Parasol Records (also home to the remainder of the band's catalog). These two sets of doggedly lo-fi and often hissy tapings comprise Jonathan Scott's most affecting musical offerings to date, outdoing the bulk of his sonically advanced Doleful albums like Motel Swim and Shaded Lodge and Mausoleum. The effect of these raw recordings is not unlike Bee Thousand-era Guided By Voices, rife with supernatural references and genius melodies that are prematurely clipped right at their very apex. Here's what Big Takeover magazine thought of Song Cyclops Vol. One:


Will Chapel Hill, NC ever run out of inspired, literate rock bands? The Doleful Lions are yet another sparkling example of the already bountiful musical harvest spawned by that unlikely spot on the map. On their third LP, which at over 70 minutes is in essence a double album, the Lions wizardly pack in nearly two-dozen lo-fi stunners. Imagine if Robert Pollard and Tobin Sprout went camping and toasted marshmallows with the Olivia Tremor Control while listening to worn-out Bob Dylan 8-tracks in the background, and you’ll get an appreciation for the Lions homebrew. The band’s deliberate inclusion of surface noise, and other home-recorded embellishments adds even more weirdness to Song Cyclops supernatural musings and surreal charisma. A totally absorbing listen.


Presented in this upload are fourteen outtakes from the Cyclops sessions, including alternate takes and some really smart covers. Not a bad way to acquainted to the Lions, but no substitute for the two-part main course. Word has it the next Doleful Lions release will be a Jonathan solo-endeavor, cut on his Tascam 4-track recorder. Can't wait. In the meantime, check out the Doleful Lion's Myspace hovel for more tuneage.
01. She's a Wallflower
02. Judy is a Punk (Ramones cover)
03. Witchseason and Madrigal
04. O Martyr Atlantis (alternate take)
05. America the Beautiful
06. Analucia (John Cale cover)
07. I Love Living in the City (Fear cover)
08. Sunshine Spartacus
09. Ghost Town in the Sky
10. Siamese Twins (Cure cover)
11. untitled instrumental # 1
12. untitled instrumental # 2
13. The Warrior's End Table (alternate take)
14. I Can Take You to the Sun (alternate take)

I couldn't find an email address, and I wanted to introduce to you guys my rock/metal band Fen, which is considered by many to be willfully obscure. We're from Vancouver, Canada, independent, and have a small but growing fanbase reaching as far as Lithuania and Brazil.

You can listen at www.fenmusic.ca

If you are inspired by the music, let me know and I'll send you a link to download our latest album, Congenital Fixation, a Freudianesque phantasmagoric acid crash into the subconscious. It would be awesome to get a review or some kind of introduction to your readers.

Hope to hear from your soon!
--
Doug,
Vocalist
ingrowth@fenmusic.ca

this is great, you've really helped me fill in my collection of hard to find albums! im wondering if you might be able to help me find one, 'mieke ep' by flake music. youve done a couple posts featuring flake, one of which ive looked for for years! thanks again!

I've been enjoying your blog for almost a year now. Keep up the great work. Doleful Lions are incredible...thanks for this post! I found a bunch of their albums on e-music. It's always a thrill to discover a new band and then to find out that they've got an extensive catalogue. Cheers!

Thanks for the feedback folks. Unfortunately, I don't have the Flake Music "mieke" ep. Was this released as a 7"?

its was, but i was lucky enough to find it a few nights ago after a few hours searching. its kinds strange how i never found it before.

Hey this is Jonathan Scott from the Doleful Lions, I found your blog and was wondering where you got these songs from? I wasn't aware I gave them to anyone, I suppose I did or you wouldn't have them. I don't mind you sharing them at all. I have a bunch of songs from those sessions that could have made up a Volume 3 but decided to release new music instead. Again thanks for the kind words, a new Doleful Lions album will be out in 2010.

Hi Jonathan! Thanks for chiming in. Well, I found these songs almost immediately after Song Cyclops 2 came out. on Soulseek, a peer-to-peer file sharing application, similar to Napster. I didn't even search for it, rather it came up in someone's folder I was browsing. Glad that I have your ok : ) Thanks load's for all the great Doleful Lions music over the years, and feel free to email me at the address in my user profile.

Hey this is Jonathan from the Doleful Lions I wanted to let you or anyone else know that I am releasing everything I have in the "vaults" for free on Sound Cloud. You can go here if you are interested www.soundcloud.com/dolefullions