Decided to pair these together considering they're both part of the "Invention" 7" singles on the British First Strike Recordings imprint. As you can tell by a brief glance of the sleeve art, there's an oddball theme going on here, namely some curious contraptions that never made it past the blueprint phase, but really nothing to do with the music at hand. 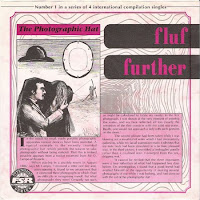 Denizens of southern California, Fluf and Further have graced these hallowed pages before. Fluf of course, featuring the noted Otis "O" Barthoulameu as ringmaster, were San Diegan purveyors of grungy pop throughout the better part of the '90s. Their cut here, "Lobster Tree" was also compiled on their singles compilation The Classic Years, which you can revel in another track from on Myspace. Futher's rather fractured brand of noise-pop drew heavy inspiration from early Dino Jr and early Sebadoh. You can listen to their Grimes Golden ep by going here. In the bio I wrote for them, I discussed their Sometimes Chimes CD. "She Lives by the Castle 2" is a slightly alternate version one of the many tracks from that teaming album. 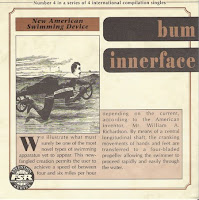 I recently uploaded an inventory of Bum's 7" repertoire, but somehow their side of this split 7" with Innerface was omitted. I believe their "Resolution #1-21" is exclusive to this wax. As for Belgium's Innerface, if you have an appreciation for the Doughboys it's a safe bet you'll like their two tracks. Seriously, would I steer you wrong?

A. fluf - Lobster Tree
B. Further - She Lives by the Castle 2

Love the Further track....Let me know if you'd like the Summer Hits "Beaches and Canyons" side project. Same vein but a little noisier. Thank you for sharing!

Sure, would be up for hearing this.

Thanks for the linkage Mac!

Oooh, Further are a new and welcome one on me. Any chance please of reupping the Grimes Golden ep?