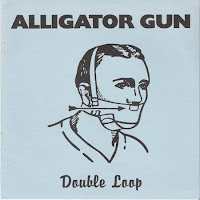 My Loomis post from yesterday evoked fond memories of yet another ‘90s Wisconsin indie conglomeration, Milwaukee’s long departed Alligator Gun. None to dissimilar from one of their key contemporaries, Samiam, Alligator Gun’s vigorous strain of neuvo-punk delivered a rush that was equal parts adrenaline and saccharine. Truth be told, the centerpiece for any AG collection is their immensely terrific debut album from 1995, Onehundredpercentfreak, yours for the taking courtesy of Book of Brilliant Things blog. This post delves a little deeper into two early singles and the post-Onehundred… mini album, Over and Out – something of an appetizer and desert for the aforementioned main course. BTW, Onehundred... was produced by Bill Stevenson and Stephen Egerton of Descendants/All renown. 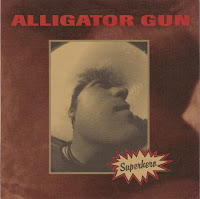 As for the two Alligator Gun singles, Double Loop dates back to 1992, when the boys were a still a little wet behind the ears, indulging in All-ular pop punk. Fun, but a succeeding 7," Superhero (no release date specified) was a veritable quantum leap in terms of overall skill and sophistication, featuring early incarnations of two primo Onehundred... tracks "Flinch" and "Curfew." More songs from this session are available for download, not to mention two early AG demo tapes from this thoughtful archive in cyberspace. 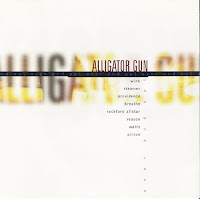 After the underwhelming reception of the album, Alligator Gun issued an eight-song parting shot in '99, Over and Out on the Chicago based Offtime Records imprint, and largely weren't heard from again until a 2006 reunion gig with Loomis and Compound Red. With it's strained vocals, not quite stretching out to all corners of its metaphorical canvas, Over and Out struck me as a bit inferior to Onehundred... but in comparison pretty much any album would.
Double Loop 7” (Erosion Records)

Alligator Gun's debut album was "Shirk," and they also had a great three song cassette before that. When Jon Kucera left (he was singer/guitarist on the two singles you posted and also Shirk) and Mark Farm joined their sound shifted to a heavier pop punk style, and this is the band that recorded onehundredpercentfreak.

As an added bonus, Rev. Norb drew the cover art for onehundredpercentfreak-- that's the only reason why I waited a few months before selling my copy.

thanks so much! I wish I could figure out how to comment on the other blog, so I could post a thank you there, too. this band is incredible. I'd somehow never heard of them, despite being into this kind of stuff...or if I had heard of them, I've forgotten. I'm not as good at remembering as I'd like to be. awesome.

Thanks BJ, I stand corrected. Downloaded Shirk from that site I linked in the post.

Yeah, that character on Onehundredpercentfreak does look like a Rev. Norb creation. Wonder whatever happened to that guy.

Glad you're enjoying it.

wow, thanks so much for this and the link to that other site. i grew up in milwaukee, so i saw alligator gun and loomis lots of times. it's too bad alligator gun weren't on like dr. strange at the time. they probably would have fared a lot better than on a major. but 100% is still one of my favorite pop punk albums of all time.

i have a couple other alligator gun compilation songs if you're interested. one from a wisconsin comp. and one from a valley girl tribute.

Wow, I never even realised they had an album before 'Onehundredpercentfreak' - a great find.

I have to agree that I think 'Over & Out' although a solid record really does pale compared to 'Onehundred...' - most certainly a band that never got the recognition they deserved, thanks to being signed to a clueless record label.

Much thanks for the link to my blog btw.

one of them is a song from their 1st album, but it sounds like a slightly different mix, so i included it.

Rev Norb is alive and well.
He resides in Green Bay and is a regular colimnist for the punk magazine Razorcake.

can you please repost "early singles"?

can you please repost "early singles"?