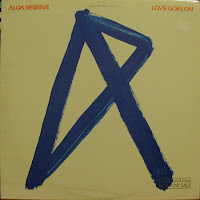 Yes, this is indeed a Sire Records product from a classic, turn-of-the-decade era, but A) the label did seemingly little to promote this record, and B) Alda Reserve were no punk/wave trend-hoppers. At most, they vaguely recall Off Broadway or Polyrock, but truth be told, there isn't a skinny tie in sight adorning the band photo on the rear jacket. With that out of the way, Love Goes On is still representative of it's era, if only for the singer/songwriter adeptness of Brad Ellis.

The ever opinionated Trouser Press Record guide insists on casting them off as a "simulation" of Roxy Music, while a more in depth and far more appreciative assessment can be read here. Any other mentions of Alda Reserve online are rather de minimis.

wow, this is great! thanks for posting this!

Perhaps along with other posters - I heard this in 1980 on the Old Grey Whistle Test - where it was illustrated with a cartoon, as was their wont at the time, then a year or so later I saw the LP in a bargain bin for 99p. I was pleasantly surprised.

I was surprised to hear them described as an Antipodean Roxy Music - that was Icehouse, surely ?

Great stuff, Julian Cope is ever so right - and yourself along with him.

Great blog, also, thanks for running this.

They actually recorded a second album for Sire but it wasn't released.Some of it has been posted on youtube [along with all the songs from Love Goes On].I think it sounds even better than the first album.Sire uncharacteristically dropped the ball on this band.

They actually recorded a second album for Sire but it wasn't released.Some of it has been posted on youtube [along with all the songs from Love Goes On].I think it sounds even better than the first album.Sire uncharacteristically dropped the ball on this band.

The comparison with Roxy Music is absurd, it's much better than that.

A lost classic of the American new wave, get it if you can.

Fabulous Album, bought it on 8 Track, would love to have heard the unreleased second album. Whiter then White is a classic. I tried to get the second album, after 35 years as a radio programmer could never track it down. The Atlantics, Big City Rock and The Dictators Manifest Destiny. The 3 Greatest unknown Punk albums of all Time

In high school I loaned this to a friend. After a week or two I asked him what he thought of it. He said:

I did not agree with his assessment, but I still play it a lot.

I had this album and really liked it. I wish I could find it in a digital format. I'd buy it again. I had a penchant for somewhat obscure bands in those days, I guess I still do. Totally disagree with any Roxy music comparison. As I recall, it's been a while, they seemed to bridge that spot between the rock and roll of the day and the hard core new wave, sometimes ahead of the curve and sometimes woefully behind. But the album was entertaining and definitaly listenable. For some reason "overnight jets" has stayed with me...

I've had Love Goes On stuck in my head for the last 40 years, and I like it. Never knew these guys were a NY band, for all I know I may have opened for them at Max's when I was in.Teenage Furniture. I would have definitely liked to say hi. Haunting melodies throughout the album, especially the aforementioned LGO.

Their 2nd LP from 1980 is finally available.
https://open.spotify.com/album/17jqxBq8FTSATwIwJO52oS?si=8OMKRY9GTFKyxywnSn-99g