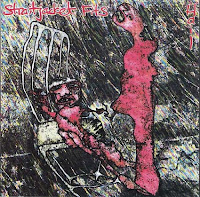 The Bats and The Chills may have beaten them to the clock by several years, but for me, The Straitjacket Fits were the quintessence of what New Zealand's revered Flying Nun label had to offer. I'm not really sure that the Fits debut album, Hail did them adequate justice, given its somewhat dense mix, but nevertheless, it was too satisfying to resist. "Life In One Chord" (a song that appeared on Hail, not the EP that confusingly shares it's namesake) bears a monstrous hook, coupled with an engulfing sonic wallop that makes this song worth the price of admission alone. Unfortunately, these days you can't really name a price on any Straitjacket Fits song/album (except perhaps Ebay), as their entire catalog has ostensibly been deleted, save for a token best-of CD.

This upload contains the Hail LP, plus the preceding Life In One Chord EP. The US Rough Trade release of Hail forfeited four of the album's original ten tracks and included the entire four-song Life EP in it's place. Not necessarily the worst move quality wise, but completests like myself were forced to hunt for the New Zealand version on CD, which contains both the album and the EP in their entirety. The CD track sequence, intermingles the songs from each release haphazardly, but this should help:

Great addition -- this is an album that has been trapped on vinyl for me.

Thank you! Been looking for this for ages.

Do you happen to have the EP "Missing from Melt" as well?

I've been looking for "she speeds" for a while now. Great upload!

Any way this could be reposted? Would love to get it.

I, too, would like to request a "refreshing" of the upload link for this post -- I know several people who are currently looking for "She Speeds."

I would appreciate if you can re-up. Thanks.