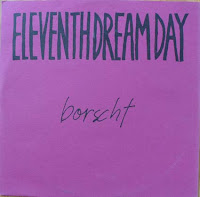 For every indie band that gets hitched with a major label and rockets to debaucheristic stardom, there are ten others that barely make a dent in the conscience of the album-buying/MP3 plundering mainstream. Chicago's Eleventh Dream Day were the latter. Granted, in this bittersweet scenario, it's somehow comforting to established fans that they can now find their newly-minted major label signees in FYE, while still having the luxury of keeping them in their back pocket as well.Eleventh Dream Day's major label-debut, and second album overall, Beet, was simply not the stuff of stadiums, boom boxes, and adoring groupies. It was however one of the most unaffected corporate co-opted albums of it's kind, bristling with wailing feedback squalls, Velvets-y swagger, topped off with enviable escapist motifs and dark character vignettes. The vinyl only Borscht, was a promotional release on Atlantic Records that was bestowed upon radio stations as a companion piece of sorts to the Beet LP. Enshrined to cassette on January 6th, 1990 at the legendary Lounge Ax in Chicago, the seven live tracks here capture Eleventh Dream Day at the peek of their powers, with full-bore firecracker intensity. It's an intense and enthralling live document of what was arguably one of Eleventh Dream Day's finest moments.

I couldn't agree more. I practically wore out my copy of this by, say, '95. Does that make me old or out of touch or both?

Thanks!!! Looking forward to hearing this. Beet is one of my favorite albums.

Oh, and another thing, the lady who A&R'd EDD to Atlantic was so frustrated over her dealings over this signing that she eventually started Thrill Jockey. Funny how those things work, huh?

I wonder if I was at this show. I can't remember. I saw them so many times, spent so much time hanging out, so much time talking about music with Baird at that record store up on Sheridan (what was that called). I've been looking for a copy of this for years now. Amazing memories, mostly how they could be the best live act you ever saw, and a complete train wreck, sometimes in the same song.

Now if someone could just come up with the Friends Of Betty LP ...

Amazing, thanks for this one!

I'm uploadin'their 1991's album Lived To Tell which will surely be with u all!

Thank you so much - one of the only recordings I haven't heard by EDD. I've got a couple of live boots up at my The New Disease if anyone is interested:

Thanks for this. I never heard this and it is fucking awesome. I've been a fan since the mid-80's. These guys and the 'Mat's were my favorite bands when I was in college at the U of I in Champaign. I love this version of Go! Far better than the slow Go! on Beet. XRT put out a compliation in the late 90's that had the fast Go on it.

Once saw Rick get really pissed off at his guitarist during a gig at Trito's in Champaign circa 1989. The guy smashed and destroyed his guitar, and I guess the band certainly could not afford the damaged equipment.

Thank you from New Orleans.

The fast studio version of Go is on the reissue of Prairie School Freakout ...

I've always thought they were live better then in the studio. Saw them several times in Amsterdam and Haarlem (Holland, for those who never heard of Holland, it's in Europe...:P). Had this one on record for years... captures their live sound very well....

Very cool record, thanks for this. I'm currently looking for two midperiod EDD albums: Ursa Major and Stalled Parade. Any chance you've got digital copies of those?