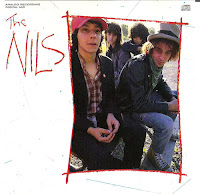 Having been hailed as Canada's answer to The Replacements, Montreal's The Nils extolled an enormous amount of talent, but would never quite develop the depth and breadth of Minneapolis' fab-four. Formed in 1978, brothers Alex and Carlos Soria founded the nascent Nils (quite literally, as they were barely in their teens at the time). After a pair of acclaimed, distortion-laden punk EPs, Sell Out Young and Paisley, issued on local independent labels, The Nils garnered international attention. Subsequently, the quartet signed to Rock Hotel, a division of Profile Records (yes, the one RUN-DMC were on). The "profile" was indeed in-effect, (that's with "low" preceding "profile") and the label did a hapless job of promoting it.

Vintage Nils followers still prefer their pre-LP recordings, but I beg to differ, as the album's version of cuts that originally appeared on the Nils EPs and demos are stunningly more taught and commanding, with a damn-near flawless recording mix to boot.

Post-debut LP, the Nils continued to play publicly and record privately, but no further releases were issued. The mid-1990s saw the formation of Chino, a Nils-offshoot commandeered by Alex that toured and issued the promising, Mala Leche EP on Mag Wheel Records (http://www.magwheel.com/). It would also be the last official Alex Soria release, as he tragically died after being struck by a train in December 2004.

I would also highly recommend purchasing on the Mag Wheel label, the Nils Green Fields in Daylight, an outstanding 29 track CD compilation of all of the Nils pre-album EPs, demos, compilation appearances and more. Mandatory listening for anyone who grabs this LP!

Thanks! The Nils are brilliant!

i have that album on vinyl.

A new album will sonn be released. All previously unreleased material recorded while Alex was still with The Nils. A DVD with early footage of The Nils live in concert will folllow shortly after. No joke, email me at thenilsband@gmail.com. Join Th Nils group on facebook. Look for The Nils (Montreal Punk Band) or look for my profile: Niko Stash and I will invite you. Also check out the page I did for the Nils on vampirefreaks: http://vampirefreaks.com/The_Nils

Read the best article ever about Alex and The Nils: http://www.montrealmirror.com/2005/030305/cover_music.html