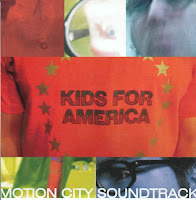 What can only be described as the "holy grail" of all Motion City Soundtrack recordings, the six-cut Kids For America ep has the dubious distinction of being limited to a mere 100 to 200 copies. Ouch. It's scarcity alone has translated into exorbitant prices of $300 or so on Ebay. This is hardly MCS' finest hour (or more precisely, 17 minutes), but Kids would prove to be a respectable stepping stone to some phenomenal albums on Epitaph Records.

I would kill for this! Where did you find it?

P.s. is the second track a reference to Minnesotan band the Bomb Pops?