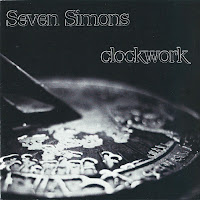 I can't believe I've waited this long to post something by Seven Simons, especially since I've owned this as long as I've been doing W/O.  That aside, the Simons were a not oft spoken of band from that noted '80s hotbed, Athens, GA.  Their debut, Clockwork, doesn't necessarily boast the aesthetics that region became synonymous with, but it's not entirely removed either.  There's more than a scintilla of a collegiate pop penchant here, vividly recalling the Smithereens and Miracle Legion at moments. "Sasparilla" has a mildly serrated, post-punk undercurrent, "Sadder Sound" is a sublime slice of acousti-pop, and "Lavender Bubbles" hangs a wily hook occupying a sweet spot between Husker Du and Men at Work.  The Simons reunited last year in fact, reconvening for a belated "third" album, Post, which predominantly consists of vintage outtakes, and even a handful of new songs.

Excellent choice. This has been in my collection in one form or another since it was released. I'm so grateful for my college radio experience! I saw them open for The Fixx when they were touring for this album too.

Sweet. Yet another unknown 80s-era indie rock platter to get into. Can't wait to give it a listen.