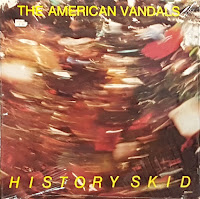 With a name like the American Vandals they have to be punk...right?   Hailing from the suburbs of Rochester, NY (a proposition alone that's cause for concern), this quartet was hardly in that league, but not thoroughly removed from it.  Louis Rossi's keyboard toys should qualify his band as new romantic propagators, but guess again.  This pack of DIY mavens were in fact very much themselves, and in many instances that's not entirely flattering.  Thomas Peter isn't the most compelling mouthpiece, though his off-pitch stride befits the Vandals tight but amateurish aptitude.  On the other hand, Doug Harradine's geetar roar is an asset, and would be even more so if he pitched us a solo now and then.  "Causalties" is mildly satisfying once you get acclimated, "Ultraviolet" exudes a vague Paisley pop sheen, while "Queen Anne" is embarrassingly goofy fodder they should've flogged themselves for.  Typically, the Vandals collective (and often meager) strengths finally come to full meld on History Skid's concluding "The Ugly Noise," a sharp, melodic salvo that's indicative of some genuine potential.  It doesn't appear this album generated enough buzz to warrant a follow-up, or so one is led to believe.

Great blog! you have an amazing prospective and thatt refelects in your writing as well. This article is great. Thank you! for pouring out your mind and soul into writing.