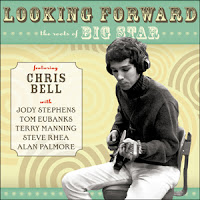 No, this isn't a rehash or repeat of Chris Bell's posthumous, I Am the Cosmos, solo album material, nor is it a re-visitation of his contributions to Big Star's # 1 Record.  Truth is, Big Star's "crazy diamond," had a wealth of experience under his belt before he encountered Alex Chilton et al, but up until now Bell's pre-Star recordings/collaborations have been scattered, smothered and not always so well covered on an array of "supplemental" releases including the little publicized Rock City CD, the Keep An Eye on the Sky Big Star box, and The Ardent Records Story compilation.  Looking Forward... is not a leave-all-stones unturned clearinghouse of Bell's entire body of work (though a much more thorough vinyl box set just might deliver such in the near future) but it nonetheless provides an ample overview of his antecedent ventures in Memphis that informed his crucial input to that first Big Star album and beyond.

To you, the established Bell/Big Star acolyte who remember the sadly deceased singer/songwriter as a wellspring of palpable angst, yearning, and a romantic frustration...well, that Chris Bell doesn't turn up so frequently on Looking Forward.  In fact, on his early endeavors (which I'll elaborate on further in a moment) the man in question rarely took the lead mic, or moreover, exuded his inner ravaged soul...though I wouldn't let that stop you from investigating.

Specifically, you might be asking, what of Chris Bell's pre-Star enterprises?  One of which that is brought up extensively in the liner notes, Christmas Future, isn't represented on the CD.  I mention them, because it's with this project Bell would align with Terry Manning, one of his key early collaborators who is involved on virtually every recording amidst Looking Forward.  The whole ball of wax got rolling for Bell somewhere in the vicinity of 1967 when Christmas Future was conceived with another co-conspirator, Steve Rhea.  Manning would join soon after, but with no recorded evidence on file we'll jump ahead to the next project, Icewater (yes, all one word).  Operating as a trio and sometimes a quartet, Icewater weren't markedly advanced or nearly as auspicious as Big Star.  We get four fully realized songs by them here, including this record's title piece, "Looking Forward," which features Bell singing it's slow-burning, bluesy refrains.  The liners boast of an occasion when Icewater auditioned for a record label, only to be rejected for resembling the Beatles too much for their own good, though you'd barely get that impression here.

Rock City was the next pit-stop on Bell's trajectory, a band whose repertoire and depth was more pronounced than Icewater.  Manning was held over after the Ice thawed, and Tom Eubanks entered the RC fold, fulfilling most of the vocal duties.  As with Icewater, Rock City didn't necessarily wield a defining calling card, yet they occupied a wavelength that ascended a tad higher than many of their early '70s contemporaries.  We encounter them on about ten instances on Looking Forward.  "Lovely Lady" weaves a sweet jangly web, "I Lost a Love" mines a proto-classic rock vein, but the most dazzling Rock specimens are exposed when we're treated to a pair of Bell-fronted songs that would be translated virtually note for note on Big Star's # 1 Record a couple years later.  The "preview" Rock City iterations of "My Life is Right" and "Try Again" (the latter also featured in the Big Star Bio-pic Nothing Can Hurt Me) are as intense and soul searching as the more well known Star versions.  I'd be remiss if I didn't mention that there was serious B/S foreshadowing taking place on "My Life is Right" which just so happened to feature Jody Stephens occupying the drummer's stool.

Amidst what I've outlined so far, we're also introduced to the Wallabys, a quartet featuring the aforementioned Terry Manning and Steve Rhea, which also involved Chris Bell on guitars.  And there's one thoroughly solo Bell take here, "Psychedelic Stuff," a work-in-progress faintly recalling Syd Barrett of all things.  I'm not enthused with Looking Forward's anticlimactic closers, a clutch of voiceless Icewater backing tracks.  One that's worthy of inclusion, purely for historical reference, the Alex Chilton penned "Oh My Soul" would have been more suitably sequenced in the middle of the album, and not so much as a finale.  This aside, ...Forward is a curious and revealing window into the world of Chris Bell prior to his fleeting halcyon days in the first permutation of Big Star, and somewhat posthumously as a solo artist.  It's available straight from Omnivore Records, Amazon and iTunes.
Posted by spavid at 5:43 PM

I was curious about this one, but hesitated to jump.

As usual, your excellent review answers all my questions, and whets my appetite for the promised Chris Bell box set.

Thank you kindly for your good work, spavid.

Those of us who know music know that Chris Bell was the genius in Big Star. The fact that Chilton produced nothing but utter dogshit in his solo career certainly proves that beyond a whisper of a doubt.

Let's be fair. Chris Bell is the reason #1 Record sounds the way it does. On the other hand, Radio City and 3rd aren't too bad....

Sister Lovers alone proves that Steve Davis's comment is absurd. They were both giant talents. Why do you have to try to score points over such nonsense is beyond me. Just enjoy the greatness of the music