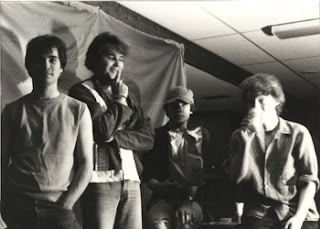 It all started like this.  In the late '90s I became a slightly belated super-fan of a 1992 album, Topeka Oratorio, put out by a couple of Midwestern-ers who incorporated themselves as The Leatherwoods.  Topeka was sadly a one-album-wonder, chock full of power pop melodies, and humble yet smart daily observations on romance and the like.  Paul Westerberg guested on a few songs (under the assumed moniker of Pablo Louseorama), and coincidentally or not, Topeka Oratorio's overarching, lived-in tact resembled that of All Shook Down era-Replacements.  The record's architects were Todd Newman and Tim O'Reagan, the latter of whom had a hand in The Jayhawks. Devastatingly good stuff, and I was desperate to hear more.

Thing is, there would be no more, save for something miraculous like a reunion (low potential at that I suppose).  Around the time I discovered The Leatherwoods, the net was still in it's relative infancy, but low and behold my  trusty AltaVista search engine pointed me to an article on the duo, wherein I learned of a predecessor to the 'woods, Lions and Dogs.  I'd direct you to the piece if it was still available.  Lions and Dogs was partially the handiwork of Todd Newman, their principal frontman.  Sometimes operating as a quartet, at others a trio, Lions and Dogs were not unlike the Leatherwoods - an earnest, low-profile collective who had an inkling of what was gestating due northeast in Minneapolis, but also possessed an ear for the rockier hues of Americana.   There would be no formal L&D releases, but the song "Be My Something" was comped on two occasions.  I'm presenting it here with about sixteen more demos and select live cuts, including prototypes for a few tunes that would be hammered out in Todd's subsequent outfit, the Leatherwoods (i.e. "Tell Me Another" "Jamboree," and "Don't Back Down on Me").  Among several inspired originals, there's a very sweet live take of Josie Cotton's "No Pictures of Dad" and a heartfelt interpretation of Big Star's "What's Goin' Ahn."  I don't have the running order for any of these songs, but in the folder is a Word doc with song-by-song liner notes.  You can read about one of Lions and Dog's relatives, Psychic Archie here, and check out two of Todd Newman's solo endeavors over yonder.

"Thing is, there would be no more, save for something miraculous like a reunion (low potential at that I suppose). "

Well, it wasn't exactly front page news outside of the Twin Cities - and, truth be told, it wasn't a super big deal here in MN either - but there were not one but two Leatherwoods reunion shows last year in the Twin Towns. The first was truly under the radar in early August at a West Bank dive bar that is barely a music venue. Todd had a scheduled gig as "Todd Newman's Secret Society" and, lo and behold, Tim showed up for what turned out to be an honest to goodness reunion show. I'm friends with Tim (and work with him) and I didn't even know about the show, something I had to explain more than once after getting angry "why the hell didn't you tell me" messages from friends who were convinced I was holding out on them. A few months later they had a proper advertised gig opening up for Tommy Keene at the Turf Club in St. Paul. I'm out of town right now so I don't have access to the setlist, but they sounded fantastic and played several Topeka Oratorio songs + loads of other goodies, including "No Pictures of Dad." It was, needless to say, thrilling to hear the boys back in action again for all of us who still proudly fly The Leatherwoods flag and had pretty much given up hope on seeing them play live again.

No Pictures of Dad

Wow, thanks for the details on these under-publicized reunions! If I lived closer to Mpls, I'm sure I would have been in the "why the hell didn't you tell me" camp myself, especially in regards to that Tommy Keene gig. Wonder if anyone recorded it. Since discovering the Topeka album I had made many attempts to contact Todd to corner him on the topic of the Leatherwoods, but to no avail. I appreciate all the links as well. You practically made my night. Cheers - spavid.

Note: "Things Ain't What They Seem" is a cover from another wonderful Kansas City-area pop band, The Bangtails (previously featured on this blog).

Greetings Spavid. Is there any chance this could be updated and made available again? Thank you from West Seattle.