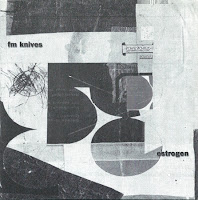 They made themselves known to the world at large as the FM Knives, but this Sacto quartet may as well have been named the Heartbreakers because that's exactly what they did to moi, and virtually ever fan who was awaiting a followup album to 2002's Useless & Modern.  Their only proper full length, Useless... was a dizzying and deliriously intoxicating merger of the Buzzcocks by way of hi-octane, American indie punk not dissimilar to the likes of the Didjits. 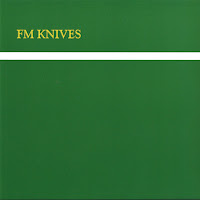 For whatever the reason, a second FM LP simply wasn't in the cards and little was heard from the fellows since, but before vanishing the band found a day or two in 2002 and '03 to lay down a few more songs for a couple of ace short-stack releases.  The Estrogen ep delivered more of U&M's souped-up, melodic moxie, wielding instant charmers "Just Like William Tell" and the title track.  2003's "Keith Levine" 45 found the knives curtailing their blistering tempos half a notch, still flagrantly bowing at the alter of Shelly/Devoto/Diggle, making yet another convincing argument for sticking around a few more years.  Twas not to be, but the FM Knives had a keen influence on the Marked Men.  Rumor has it the Knives reformed for some concerts this year.

Years ago a few unreleased Knives surfaced online (possibly from the Keith Levine sessions), and I'm supplementing them as a bonus in this download.

The In Crowd said...

Hurray! A treat to wring out some more bits & pieces from this great gone band. Thanks for sharing!

Oh wow, a cover of "Two Swords"! I am unfamiliar with FM Knives, but I adore the Marked Men, and I just ordered Useless & Modern based on your description. Thanks!

Miss these guys, was lucky enough to see them live once in Seattle early 2003. Thanks for the unreleased tracks!