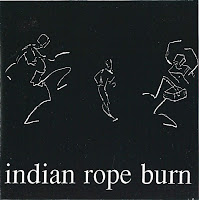 You might call this a belated follow-up to an Indian Rope Burn single I flung out here in 2012.  I must have enjoyed it, because I went to the effort of tracking down more stuff by them.  The Kent, OH band in question was a trio at the time of this nineteen-song disk, and sad to say, it really doesn't contain any phenomenal or must-hear selections, but occasionally some good ones including "Stranger" and "Have You Heard."  There's a post-punk, anglophile modus operandi running amok here, bringing to fruition what a Yankee version of Love and Rockets might have amounted to - that and a watered down spin on Red Lorry Yellow Lorry on some of the album's later selections.  It would appear that all three gents in IRB contribute vocals.  Problem is, no one in this Buckeye skeleton crew possesses the melodic timbre to propel these songs into the endearing and memorable thresholds they sometimes teasingly suggest.  The percussion sounds robotic, and it was no surprise for me to learn the band adopted a more industrial tack on subsequent records.  Perhaps Indian Rope Burn will grow on me, but for now, you be the judge.

Confession time--I once got them confused for Indian Bingo.

Good lord -- you actually found this!

Listeners would be better off finding our last CD "The Big Bang Payoff (1996). It's a much, much better disc. ;)

Indeed I did Mike. I think I have an un-listened to copy of the Big Bang Payoff somewhere around here. Stay tuned (maybe. As for you JK, at least you've heard of them.

Hi there!! Any chance you'd kindly repost this? The link is dead. Thank you!!