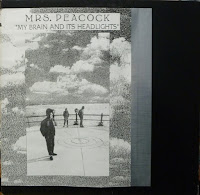 It wouldn't be the least bit of an exaggeration to say this one is something of a no-namer - but an intriguing one at that.  The almost un-Googleable Mrs. Peacock were a trio that strutted their proverbial "stuff" in/around the environs of Gloucester, MA,  Side one (tracks 1-3) is impressive DIY post-punk flirting on the fringes of goth.  A bit of noir mystique, chiming guitars, and a mouthpiece faintly recalling Julian Cope tally up to more latent potential than one might expect.  Two iffier items occupy the flip of My Brain..., with the ambient drone of "Sally's Song" out-weirding anything else in sight.  Overall, not bad for a 50 cent yardsale find.

Good pictures and thanks for sharing! i show you a good site for you to see more headlights
,i know it has good quality with low price.and for free shipping.

can be found on Bandcamp.com more tracks, not a lot more info