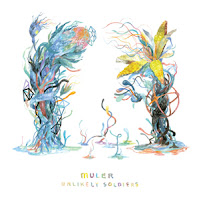 Out of all the indie-rock hopefuls to emanate from Rochester, NY during the Clinton-era none charmed me as much as Muler fronted by the deftly skilled David Baumgartner.  Many singles came and went between 1993-98, but more notably a smashing debut platter in 1997, The State of Play, chockablock with tuneful turbulence and heart-on-sleeve text.  In 2010 or thereabouts, I was happy to learn of Muler's exceedingly belated followup, Hope You Found a Home.  That record signaled Baumgarterner and Co.'s graduation from post-adolescent to common ailments of maturity.  It was a Muler album alright, but to varying degrees I was able to discern that the record stylus was slightly amiss of the grooves, lacking some of the spark and verve of a more vibrant and visceral past.  To my delight Muler's needle is locked right back in place all over the freshly minted Unlikely Soldiers, which if anything picks up where 1997's State of Play left off.  The rush of clangy chords and dense arrangements is thriving on "Soldier," "Jumping Jack Queen" and "Olivia," and the guys are still suave enough to dig into the well of small-scale dilemmas, eschewing any potential emo schmaltz to the curb.  I still have Muler loosely pegged as a fusion of Buffalo Tom and the Promise Ring, but that strikes me as more of a tasty coincidence than deliberate plundering.  In any event Unlikely Soldiers isn't an unlikely return to form, so much as a welcome one.  It's available digitally through Bandcamp, Amazon and iTunes.  Excruciatingly limited physical runs on LP and cassette are available per the Bandcamp link. No CDs?  It's like 1982 all over again. 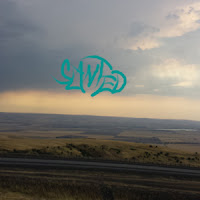 We checked in with Cincinnati based denizen Casey Weissbuch (aka Slanted) a year ago via his premiere offering, the slanting and often enchanting Forever, crammed fulled of maneuvers that signaled allegiances to inspirational antecedents of yore like Polvo and Dinosaur Jr.  Slanted's new ep, Desire for Lust delves a bit further into the weeds, downplaying verse-chorus-verse song structures in exchange for tweaked and decidedly more introverted motifs.  "Santa Fe" occupies a downcast, droney space, entailing a smidge of avant weirdness, a la Creeper Lagoon, while the concluding "My Universe" indulges in a chilled-out, lackadaisical stride.  I do believe I'm picking up some co-ed vox here as well - either that or Casey is really adept at throwing his voice.  Check out Desire for Lust at a price of your own discretion here, and lay yours ears on the aforementioned Forever if you haven't already.

I haven't dedicated much space to Dayton's Smug Brothers in a good five years, specifically not since the insertion of 2011's Fortune Rumors into the marketplace.  Hardly ones to sit idle, they've been churning out roughly an album a year and their latest salvo, Echo Complex is split release between the Bros and Brat Curse.  I'm not going to avoid saying it - these guys do exude a considerable resemblance to their hometown boys done good, GBV (think Under the Bushes, Under the Stars era).  They even involve an alum of that recently disbanded American treasure, Don Thrasher in their lineup, but the going here isn't as derivative as I might be leading on.  Try the pop-sided "(A Minute for) Ruby Skate" and the mildly angular "Razor Thin Races" out for a spin and you'll get the idea.  Lot's of bite-sized "shorties" here, some of which clock in around a mere thirty seconds.  As usual, Bandcamp has you covered.

I realize that you can preview all three of these items on an abundantly aforementioned music platform, but for what it's worth I've strung together a brief three cut sampler.  Enjoy, and if you like what you hear support the bands!