The sound of Leatherwood Studios - Pychic Archie, The Tunes, and Abuse - a brief overview.

Topeka, Kansas in the 1980s - you had to be there.  Full disclosure, I wasn't, and perhaps the "had to" portion of that statement might have been a bit of an exaggeration, but if you were present and of legal age to attend club gigs you may have been a better person for encountering some or all of the bands this entry concerns.  All three of which, btw cut their music at the now defunct Leatherwood Studios in Topeka. 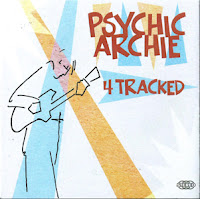 To the detriment of the music world in general, Psychic Archie wasn't a moniker that was likely heard far outside of America's heartland.  Composed of Mike Donoho, Clay Gailbraith, Kirk Morris and Chris Garner, the Archie's lineup congealed after two local predecessor bands Abuse and The Tunes called it a day circa the early Reagan-era, the first specializing in punk, the latter in relatively preened and polished power pop.  While the Archies didn't entirely disavow either of those genres, Donoho and said cohorts painted from a learner, yet lovingly gritty sonic palette that today might mundanely be classified as garage rock.

Between 1984-85 Psychic Archie were responsible for two ep length cassettes, remastered and re-sequenced on the newly minted compendium 4 Tracked.  It's not necessarily a wall-to-wall goldmine, but the band's best moments are stunning.  This is due in part to local Topeka collaborator Alan Oliver, who wrote two of PA's most memorable songs, "Happy Man," and "No Pictures of Dad."   That latter gem was licensed to Josie Cotton (yes, of "Johnny Are You Queer" fame) who performed the song on an episode of the '80s sitcom Square Pegs.  The Archies spin on "No Pictures of Dad" isn't as gussied up as Cotton's, rather they transform it into a mid-fi marvel, tweaking it to such a bittersweet extent that you might mistake it for something Guided By Voices wrote, say, in 1990.  "Happy Man" was later adopted by a fantastic, one-album-wonder of a band, The Leatherwoods who covered it on their 1992 Topeka Oratorio LP.  As you might guess, that band named themselves after the recording studio where PA recorded.  And there are even more must hear salvos - "Don't Kiss Me Stranger," the previously unreleased "Flag of My Own," and "Every Time it Hurts," which if listened to attentively reveals a slight similarity to The Paul Collins Beat classic "Walking Out on Love," just when the chorus hits. 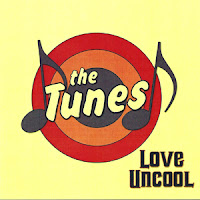 Onto life before Psychic Archie.  Commandeered by future Archie's frontman Mike Donoho, The Tunes were responsible for a lone 1982 ep.  It's a remarkable slice of turn-of-the-decade power pop record, impeccably crafted and honed in the manner of the Rubinoos, Undertones, Pointed Sticks and even lesser knowns like the Speedies.  Original copies fetch upwards of $100, and a 2013 vinyl repress has also come and gone, but a digital incarnation of the ep has been expanded as Love Uncool.  The four insurgent blasts from the record are par excellence perfect "tens," if not rock-solid "nines."  Better yet they're buttressed with six demos that predate the ep by a year, many of which are equally peerless.  Folks, this is how it's done, and if you don't believe me try "Crowded Heart" on for size to get the Tunes irresistible and infectious gist. 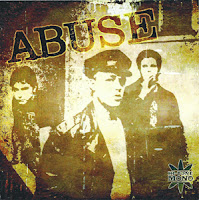 Abuse were another precursor to PA, featuring amidst their three man lineup Clay Gailbraith and Chris Garner.  A decidedly surlier bunch than The Tunes, you might say that Abuse were about as close to the definition of punk that Topeka had encountered circa the band's 1979 inception...and their discography was even slimmer than the Tunes.  Literally.  While the Tunes culminated in an actual vinyl record, Abuse's meager body of work was relegated to a three-song flexi disk in a Lawrence, KS fanzine, Talk Talk.  It's been reprised entirely onto CD along with one bonus cut.  "In America" boasts a linear, socio-political bent, but "No Money" sticks to the ribs with quips like "I never said I didn't like money, I only said I didn't like you."

All three reissues are available as we speak via the Psychic Archie website as hard copy CDs or digital downloads.  A fairly extensive article regarding the heyday of the Leatherwood Studios "scene," as it were , can be found over at Shea Magazine's site.  For a limited time, I'm offering a sampler of what I've critiqued here.  In addition to one song from each of the reissues, I'm including a live version of "No Pictures of Dad" performed by Lions and Dogs, a Psychic Archie spinoff band.  Enjoy.

Wow, I had no idea about these reissues. that Tunes EP is great--to me it sounds like the earliest Lookout! Records band to date....

Yeah, I saw your review yesterday when I ran a search in them. How dare you keep these guys a secret!