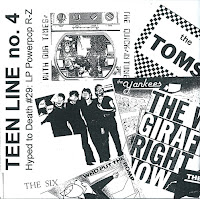 Looks like I'm about half a year overdue in my presentation of the fourth volume in the much coveted Teen Line series of primo, power pop arcane-ology, that is writ large the province of this very website.  Only thing is, I didn't assemble any portion of Vol. 4 or the three installments preceding them.  Teen Line was a formally in-progress and now sadly incomplete and abandoned project that was in the hands of the Hyped to Death curators who were also responsible for the Messthetics and Homework series, loosely modeled after the considerably more renown Killed By Death DIY punk comp empire. 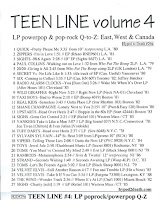 To backtrack on something I just mentioned, much of the roster crowding up Teen Line 4 actually isn't as arcane as you might expect, with veritable heavy hitters like 20/20, Real Kids, Paul Collins (Beat), Sylvain Sylvain.  That being said, there's a host of others I've already introduced you to over the course of Wilfully's tenure - Wild Giraffes, Ramrods, The Strand, Radio Alarm Clocks, Velvet Elvis, and The Wind.  If that weren't enough there are some true-blue cult classics from the likes of Shane Champagne, The Toms, The Quick, the Sighs, not to mention a cavalcade of others I never broached myself until I made their acquaintance with this dandy little disk.  The full tracklist is to your right.

Thanks! I have the CDs, but have wanted to get these into iTunes as well and the CD-rs don't want to load and the songs don't tag.

I really wish this project would have continued, but I think Chuck got a couple of complaints from artists and decided it wasn't worth the hassle.

Thanks much! A real gem in the TEENLINE series...tho most of them, thanks to thia great blog, and others, have finally been available to pop kooks like me, but it's fun to finally hear releases I always used to see advertised, or reviewed, in Trouser Press, NY Rocker, Bomp!, etc over the years....THANKS!

Is it possible to re-up the Teen Line 4 comp?