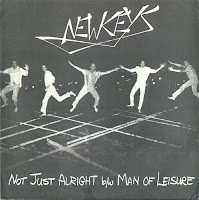 It's been a staggering seven years since I presented Newkeys debut long-player, Acts of Love, but I don't recall it being half as enticing as this exponentially better 45.  A D.C.-area combo that the hepsters of their era apparently wouldn't touch, the Newkeys possessed an anonymous but effective power-pop angle, that would have capably slotted in on a myriad of '80s comedy soundtracks, just as much as your hole-in-the-wall dive of choice.  The out-and-out catchy "Not Just Alright" is the obvious keeper here, which coincidentally or not, is reminiscent of some of their equally clandestine contemporaries like the Dads and Volcanos.  In what might be the first for a 7" (or perhaps even any record, period) the band includes an alternate ending to "...Alright," commencing immediately after you assume the track has ceased.  Check out my original piece on the Newkeys here for more fun facts.

A. Not Just Alright
B. Man of Leisure