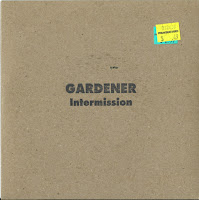 Little did I know that when Seaweed's fourth album, Spanaway hit in 1995, it would be the last we'd here from them for almost half a decade.  Just before their 1999 follow-up (Actions and Indications) materialized, the king of kale himself, Adam Stauffer dished out a surprising offering to tide us over.  Gardener was a collaboration between Stuaffer and Van Conner of Screaming Trees renown. Originally conjured up in 1996, the group quietly slipped an LP, New Dawning Time onto the market in '99 without so much as a whisper.  Booting Seaweed's aggro punk-pop straight to the curb, Gardener was exponentially more loose and breathable, with a significant acoustic penchant.  Clearly in the drivers seat, Stauffer trades off on vocals with a bevy of female counterparts on New Dawning Time, and the same setup carries over onto both sides of this one-off 45.  "Boys of Summer" is indeed the Don Henley composition, one which made Top 40 radio in the mid-80s at least mildly tolerable.  The Gardner treatment entails a lo-fi makeover with Stauffer sharing the mic with Iana Portner - accompanied by the intermittent chatter of a news/sportscaster sampled in the background, that thankfully does little to tamp down the melancholy charm of the song.  "Two Sides" featuring co-ed vox from Sarah Stauffer (Adam's wife?) exudes a slightly more extroverted flair not to mention a rock solid hook, matching or exceeding anything on New Dawning Time.

BTW, per Discogs, this single was evidently housed in an actual paper bag (hence the name of the label/series) but mine came in a stamped chipboard sleeve.  Make of that what you will.

A. Boys of Summer
B. Two Sides

A friend of mine turned me on to "New Dawning Time" when it came out. I've been in love with it from first listen. I was very late to the party with Seaweed getting into them with "Actions & Indications". Gardener seemed like the flip side of the same coin to me. I've heard rumors of Gardener self released cassette albums but never been able to find any. Thank you for posting this 45!

New Dawning Time was more of a grower for me I suppose, but I'm not complaining. Would love to hear those tapes you mentioned. Had no idea. Thanks for commenting.

Been looking for those songs forever!! Any chance you can re-load that link. Says it's expired. Thanks!!

Please can you reupload ? I was looking for these songs for ages. Thanks