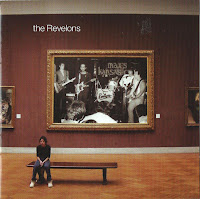 I picked this one up several moons ago on the expectation that it might be interesting - and it was.  Covering The Revelons 1977-82 lifespan, the hodgepodge Anthology entails the band's precious few recordings, including a single cut for Ork Records in '79 ("The Way (You Touch My Hand)" b/w "97 Tears").  Denizens of New York and fixtures at CBGBs (Hilly Kristal contributes brief liner notes) the Revelons dabbled in a myriad of punk-related pastiches including proto, post and wave.  Sometimes operating as a quartet, others as a five-piece, frontman Gregory Lee Pickard was the band's focal point.  The Revelons revolving door of collaborators included Fred Smith of Television and Jay Dee Dougherty courtesy of Patti Smith's tribe, though these guys barely harkened to the sound of either of those legends.  The first half of this collection easily trumps the second, not only containing that edgy Ork Recs 45, but a pair of previously unreleased power pop jewels, "Brighter Side" and "Outlaw With a Gun."  Culled from a 1981 studio session, these dandy ditties slot vaguely in the vicinity of The Knack and Dwight Twilley, and would have made for a winsome follow-up single.  Anthology closes out with two tracks from a 2002 reunion session.

By the way, that aforementioned Revelons single for Ork was reissued as part of the Ork Records Complete Singles 7" box set, perhaps the most decadent treat of this years cavalcade of Record Store Day releases.  Check out the specifics at Numero Group's website.

"The Way (You Touch My Hand)" single on Ork is one of my most prized possessions. Classic New York punk rock. Thanks for this album. I didn't know most of this existed! Ha! Why-ullld! Ha!

Hello there, thank you so much for running this blog!! Is it really fantastic. Would it be possible to repost the revelons link? I've been listening to everything I can and would love to hear this album. Thanks for any help!

I've been going through your amazing backlog of treasures, thank you for these as well! Especially for the introduction to The Restless. And I think I'm beginning to learn the lingo as well, would there be a chance of a re-up for the Revelons Anthology? Thank you so much for having this blog again! Cheers

The link is dead:/ Much sadness!