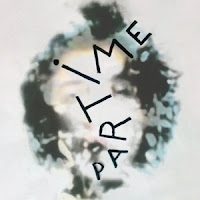 Partime's David Loca (with "Speck" being an alternate surname when it suits hin) must be thoroughly exhausted.  After all, Virgo's Maze (a double album no less) is the fourth PT-related project to be unleashed in the last eighteen months, hot on the heels of Return to Cherry, Late Night With David Loca, and H.F.M. with the latter of those two being double-length cassette releases.  Top that Robert Pollard...but I seriously digress.  For the uninitiated, L.A.'s David Loca essentially is Partime, an ongoing mid-fi electronica project that often involves him as the lone performer on his records, but fleshed out with a full ensemble when onstage.  I've seen the much cliched "bedroom pop" accusation thrown in his direction at least a couple of times, and given his penchant for smearing hazy, vintage synths with Peter Hook-informed guitar lines and cheeky vocals of varying demeanor, I'm tempted to use that patently lazy assertion myself.  The first proper Partime (or "Part Time," take your pick) album, What Would You Say, alongside an opening slot for The Drums and Craft spells in 2012 was what sold me, and I've been trying to keep up with the man in question ever since.

There's an abundance of neuvo keyboard-pop virtuosos making the scene of late - Passion Pit, Porter Robinson, etc, however while those contenders have an itch for glitch, Partime is more about kitsch - and perhaps a little feigned naivety as well.  Not merely a few fabled "found sounds," rather a much more engulfing sonic palette built on a bedrock of raw, swarming synth riffs, the likes of which haven't been encountered this en masse since the Reagan-era.

The sprawling Virgo's Maze, features twenty homegrown tunes recorded over the span of the last five years - and it sounds it.  When you hurl this much at the proverbial wall, some of it simply ain’t gonna stick, not the least of which a thoroughly sardonic take of the Beatles "I Saw Her Standing There."  Although Paul and Ringo probably won't be seeing much in the way of royalties for that one, you the listener will be enchanted with Virgo's other selections, particularly the title track, "Strangest Eyes," "Touch Me Responsibly," and "Real Connection" all brimming with Loca's suave, melodic aesthetic and ironically hued vocal panache.  Of course, a Partime album would be nothing without a few glaring anomalies and Virgo surprises with the uncharacteristically lucid "River of Dreams" and "Fallin' 4 U."  The bouncy, guitar-driven "Don't Sweat the Small Stuff" trades in new romantic for British invasion, while "Pussy of My Dreams" might pass for Thin Lizzy or T. Rex in an alternate universe.   If this is your first encounter with Partime you might be better off starting with the aforementioned What Would You Say or even 2013's PDA, but once you're inculcated in the cult of Dave Loca, it will be a no-brainer to indulge in Virgo's Maze as well.  It's available this week direct from Burger Records, Amazon and iTunes.  Check out a sample or two below via Soundcloud.