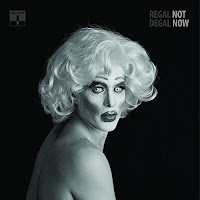 My first impression of seeing Regal Degal perform last summer - Let's Active using the Cocteau Twins distortion effects.  Yes, this Brooklyn by way of Lost Angeles trio was something pretty damn gnarly.  And even if they didn't consistently transfer that startling live alchemy to their early studio endeavors (2012's Veritable Who's Who not to mention a few free form experiments) they're inching closer.  Not Now is a sizable rung in that developmental ladder.   Sonically, RD possess a pair of telltale quotients that are becoming all the more apparent on successive records - chiming guitar tones and vibrato-enhanced rhythms.  That latter facet exudes a mildly trippy sensation without amounting to anything too heady.  This formula may not strike you as particularly radical, and maybe it isn't, but when meshed with Josh da Costa's echoey pipes and intermittently oblique prose, Regal's artful, noise-pop cocktail sounds exponentially more fresh and post-modern than anything Pitchfork or other taste-makers are likely to steer you towards.

If there are any obvious signposts on Not Now's highway late-80s Wire is an apt one, albeit Regal tuck such inspirations into a warmer context, not dissimilar to skewed new wave revisionists Part Time and The Drums.  The highlights here are numerous, key among them the quivery "Pyramid Bricks," previously available on an ep of the same name. "Delicious'" gyrating pop shuffle is as toothsome as it's title implies, and "Sit Like a Chair's" dense, post-punk aplomb is more likely to purge you from your throne than keep you seated.  You can acquaint yourself with a smattering of  Part Time's surreal magic via Soundcloud.  Not Now can be purchased straight from Terrible Records, or digitally from the usual suspects. 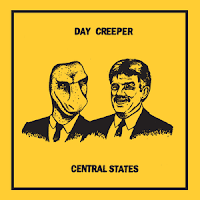 Onto an entirely different kettle of fish, namely Day Creeper, a no frills punk 'n roll aggregation from Columbus, OH.  There's precious little in the way of mystique populating the ten grooves on Central States but who needs mystique when you have songs?  Scraggly and rugged little ditties at that, with a straight-up, ass-kicking panache a la some of my ferocious faves like Snatches of Pink, Finger, and the Affected, even dipping into the Supersuckers and Stones bag of tricks now and again.  Day Creeper spill earnestness and grit in the manner of an overfilled beer stein just about anywhere the needle lands on ...States, yet are disciplined enough to abstain from any gratuitous maneuvers.  Have a copy (vinyl only!) delivered to your doorstep via Super Dreamer's website, and if you require further convincing you can stream a handful of songs on Bandcamp.
Posted by spavid at 12:08 PM

hey! daycreeper are good! and they're just up the road (i'm cincinnati).
you'll like these cincy guys, similar vibe, and they're more fun to see than anybody i've seen for a while (they make me giddily wanna drop everything and join the band)
http://theprohibitionists.bandcamp.com/album/extended-play