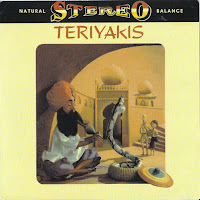 There must have been some suspicious particulates in the water this Lawrence, KS based outfit was imbibing at the time of this recording in '96.  The Teriyakis' noisenik proclivities were at the very least informed by Polvo's dissonant juxtapositions and alternate guitar tunings.  I'd argue these folks were even more bent, given their ability to make one song sound like a jumbled melange of two compositions...or more.  "Romper Stomper" and "Red Hula Hornet" simultaneously merge the techniques of early Pavement, the Feelies and then some.  The concluding "The Power of Pablo Neruda's Vest," bears a chilled-out Velvets-y lilt, and is by far the least unwieldy thing on here.  Let it be known that Bob Weston worked on subsequent Teriyaki's releases.

so, i've now seen two teriyakis-related posts on mp3blogs today, completely by accident. I was in the band, so that's why it's so weird. thanks for posting this! i don't think i've digitized the 7" yet. Take care.