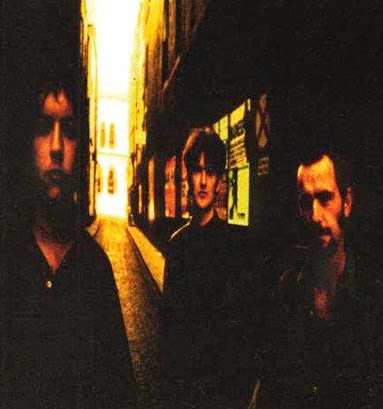 Ever since Rapidshare made my life miserable in early 2013 and dumped the entirety of files I was hosting through them, I've been getting requests from many of you for restored links.  The amount of requests received for the recommissioning of certain titles functions as a barometer of sorts of the popularity of what I've shared over the years.  One name that's garnered multiple requests is Rollerskate Skinny, or more specifically their early eps, Novice and Trophy that I first made available in 2007.  When I recently discovered a live recording of the band via a Facebook fanpage, I jumped at the chance to hear it.  Number one, RS were from Ireland (and only toured stateside once, or twice tops), and number two, I don't know of any other live recordings in circulation.  On top of that, this is either a soundboard tape or a high quality audience recording.  In short, a colossal find.

The Belgium concert in question was culled from the band's campaign behind their debut LP, Shoulder Voices.  You can click on the above hyperlinks for pertinent background details on the band (not the least of which Jimi Shields, brother of My Bloody Valetine's Kevin Shields, was the Skinny's guitarist).  Aesthetically, RS were coming from the same place as across the pond contemporaries Mercury Rev, though Jim Shields and Co. were IMO doubly more creative, not to mention oblique.  If you have yet to make your acquaintance with these gents you may want to familiarize yourself with their studio albums first, particularly the aforementioned Shoulder Voices, available from iTunes, Amazon and the like.

This hits the spot - thank you. out of RS' ashes came Kid Silver. Dead City Sunbeams is also excellent.

After Rollerskate Skinny and Kid Silver came Favourite Sons. Favourite Sons have been known to do 'Speed to My Side with a chorus of guitars from close to 10 guest singers and guitarists.