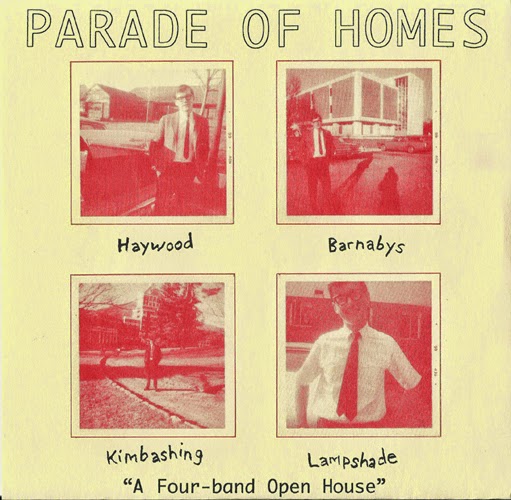 Even with the resurgence of vinyl, the compilation 7" seems to be an entirely lost art.  They were ubiquitous in the '90s, at least in the indie and punk communities.  Parade of Homes isn't my favorite example of the medium, but it's still well above average.  I can't really say that any one participant here is a "draw" or an "anchor" so to speak, but I know that the Barnabys had a decent following in their native Philly.  Their contribution (in this instance, just singer Joey Sweeney kicking it acoustic), "Tiny Ships" is of humble bedroom aesthetics.  Their Augustus Loop CD can be found used without much effort.  Side one is really where Parade... is at, boasting a pair of indie-guitar rock hopefuls that play for keeps.  Haywood's "Devon Lanes" wields the humble self-deprecating card, while Kimbashing follow that up with "Ultra-Easy," a surging melodic maelstrom that exudes a Chapel Hill sized hook.

Hi. Will you please update the link sometime? The old one has expired. I'd like to hear the Barnabys track. Thank you.

please reup this one. Many Thanks !!