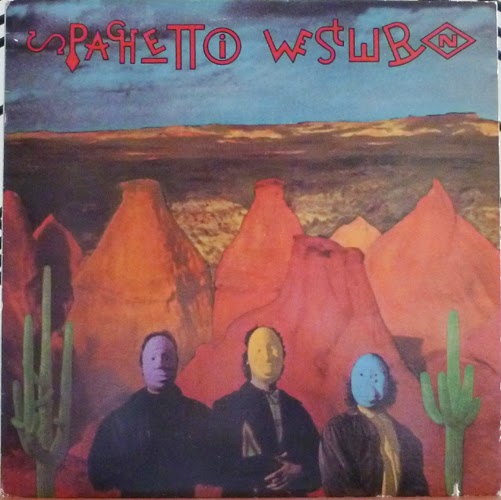 With a name like Spaghetti Western it has to be twangy...right?  Amazingly, you won't find a speck of cowpunk bravado anywhere on what appears to be the Western's lone platter.  The C&W attributes that occasionally crop on Spaghetti Western are relatively tame - as is the overarching modus operandi of the Jon Bertini-fronted trio itself.  Skewing more in the direction of the first two Marshall Crenshaw records (and even more sparingly along the lines of the Rain Parade and Grapes of Wrath) than anything else, SW's homey Americana bent is to their advantage, not their detriment.  And the real kicker?  This thing came out on Epitaph Records of all labels!  Heck, Bad Religion guitarist/main man Brett Gurewitz even co-produced the friggin' record, just a couple years before Suffer would set the world afire for Christsakes!  Doesn't get much more unlikely than that folks.  Another blog did a nice piece on this record, offering a decent backgrounder from what I recall, but it has apparently been stricken from the internet.  I hope I did this justice.

Epitaph was somewhat experimental in their offerings early on. They put out the first two Thelonius Monster albums as well.


Hello. Let's change links. We are the music application with the Gnostic resource, besides doing research in about a musical environment.
http://anti-muzic.blogspot.ru/

Hmmm. Had no idea Epitaph was once home to TM. Then again, I never followed that band.

Great to see this record getting some props.

Thanks for posting this. Jon Bertini also collaborated with Brett Gurewitz on the Seeing Eye Gods' five-song EP (billed as "Ripped Van Winkle" and "Billy Pilgrim," respectively), which also came out on Epitaph in the mid-'80s. The story I heard along with that EP - no idea how true it is - is that Bertini was Gurewitz's drug dealer at the time.

Any chance you could re-upload this?