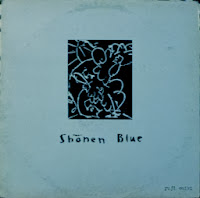 I take comfort in the fact that I'm still discovering stimulating records from as far back as twenty to thirty years ago, made by unknown quantities that fall into my lap every so often.  Yuji Oniki's Shonen Blue is a grade-A example.  Having received high praise from the likes of the late Alex Chilton, and the more recently departed Scott Miller of Game Theory, this seemingly reclusive Japanese/American singer-songwriter was responsible for a handful of albums, including this stunning debut.  Shonen exudes a pastoral folk rock lilt, but it's latch-hooked to the slyly surreal nuances of "new south" indie pop, not far removed from say, Game Theory or the Reivers, but in a demonstrably more pensive and forlorn context.  Yuji's thing is ballads, and the brunt of them wouldn't sound at all out of place on an REM album - more Out of Time than Reckoning but occasionally the opposite.  While still grounded, "Ave 'C'," "Ghosts," and "Fairport" are simultaneously transporting.  Haunting.  Pristine.  Evocative.  It's all here.  For me, Shonen Blue's standout piece is the commencing "Cover," flavored with a chiming, crystalline post-punk guitar lead that smacks of one of Yuji's choicest contemporaries, For Against.  A thoroughly solid record.  My copy suffers from it's fair share of vinyl noise, some of which I was successful at smoothing over, but a cleaner copy is in order.  I found an alternate, blemish free rip of "Cover" from a miscellaneous source that I'm also including in the folder.  BTW, the album jacket is actually white.  I took it upon myself to alter it with a bluer tint in Photoshop.

Two subsequent Yuji Oniki albums exist, neither of which I've encountered thus far.  Mystical Beast blog did a nice write-up of Shonen Blue, thought it looks like the d/l links are dead.

Gotta hear this based on that write-up. Not to mention an endorsement from Scott Miller.

"Rails In Vain", from his cd TVI is an all-time fave. Posted on Youtube: http://www.youtube.com/watch?v=OLKQoVxcpbc

Yuji lived here in the SF Bay Area, but unsure where he resides now. I don't know of any other records from him other than Orange & TVI.

I'm so happy that someone else on the planet feels the same way about "Cover" that I do. I found it in 2000 in the free box at a record store. It's on the Lonely Planet Boy compilation (another must-have if you're a Big Star fan). -Shawn Marie Hardy

Is there a way to get digital versions of this album? I already own two of his later CDs. I had never heard of this album.

I'm pretty sure Yuji and family are in Japan these days, but not sure what he's up to. He's not really keeping in touch with people from the SF area, as far as I can tell.

He was in Woodstock, NY for a while after leaving SF. That's all I know.

Could you please re-upload this album with your next round? Thank you and thanks for keeping up the blog. It has introduced me to so much great music over the years.

Thanks so much for updated the link on this record. There is a fourth release from Yuji on iTunes titled Sister Worlds from 2008 that is definitely worth checking out. Wish he were still making music ...

Howdy! I really enjoy Orange and Tvi and have been looking for a copy of Shonen Blue. I realize you already did this for others, so I apologize for asking again but could you please provide a link to this album? I would be infinitely grateful! Thanks for the great site.