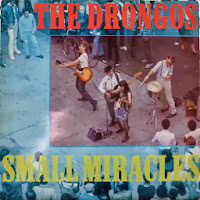 If you're gonna record your album on the sidewalk (for Chrissakes) you might as well go all out and start the tape rolling a hop, skip and a jump away from Times Square in midtown Manhattan.  That's what the Drongos did, a co-ed quartet of New Zealand transplants who I introduced you to a couple of years ago by way of their first album.  For an outdoor recording of any variety, the audio here is impeccable, and could easily be mistaken for a studio LP, were it not for the modest applause the band garnered at the conclusion of each number.  Amazingly, there's next to no obtrusive ambient noise (i.e. traffic) to gum up the proceedings.  In fact, if there were any blemished takes of these songs, they were obviously discarded in favor of the pristine versions that comprise Small Miracles.  It's a slight departure from their debut, and remarkably organic given the technological and architectural marvels that were literally surrounding the Drongos.  Performed on battery powered amps and a spartan snare drum, the group's frugal setup lent itself to no-effects, roosty rock and roll with an appreciated indie edge.  Buskin' out nearly a dozen tunes, the Drongos offer a pair of American standards in their setlist, Johnny Cash's iconic "Get Rhythm," and Chuck Berry's "Monkey Business."  Lots of sweet guitar tones on this one as well.  Incidentally, this whole deal went down on September 5, 1984.

THanks, I remmember "substance abuser" being played not infrequently on WNUR chicago- And then in Rose Records i held the vinyl reading disbeliving and admiringly that it was . as you said recorded on the street - whats more punk diy than that? Fuck your cinderblock rectangles and metered utilities! we're not institutionalized to your norms! HA! Take That! I couldn't afford to buy the record though, and i'd really only heard one song off it - 5-7$ is a lot of cans of tuna fish/cigarettes if it doesn't pan out. I opted for either john cale, Jazz Butcher, or the Fall - that was like a years record purchases - it wass all "C-60, C-90, GO!" those days
thanks for enabling a re-do