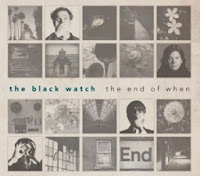 It just dawned on me to today that The Black Watch's tenure has spanned no less than a four decades, yet they've been a band for less than 30 years.  Funny how the math works out with that kind of thing, eh?  And speaking of time, it hasn't been a very long layover since their last LP, 2011's Led Zeppelin Five.  In my review of that album, I lamented the fact that I encountered BW waaaaay late into the game, but oddly enough if these Los Angeles denizens are an unknown quantity to you, there's an app for that, namely the The End of When's bonus disk, which functions as a primer of John Andrew Frederick and Co's. work heretofore.  More on that in a few moments.

Merging a post-punk ethos with singer/songwriter acumen, The Black Watch split the difference between adult angst and romantic ambivalence.  In keeping with the tradition of much of their earlier endeavors, The End of When is well equipped with sonic disparities.  Think of the album as a funnel, with the relatively expansive top housing billowy, reverb soaked pop tunes like "Meg" and "Oh Oh," graduating to a narrower, chilled-out base resulting in the insular comedown, "Unlistening."  Truth be told, TEoW isn't a perfectly tappered cone, but when absorbed as a whole it exudes the flow of such a trajectory. We're treated to a couple of sweet anomalies (relatively speaking) along the way.  The pensive love quandary, "Always Honey," benefits from chiming guitar leads that could have been borrowed from New Order's Movement, although the effect here is much more subtle.  And punctuating the relative calm of TEoW's latter half, we have the penultimate "A Pleasing Dream/That's You and Me All Over," which stokes the squalls of feedback a la halcyon-era Swervedriver.  All in all, another damn fine Black Watch record.

The aforementioned bonus disk bundled with The End of When is a sixteen song Black Watch taster featuring material from the second-to-last disk, Led Zeppelin Five dating all the way back to '91's Flowering.  Below is a link to two songs from the new record, and in fact, one from Flowering as well.   TEoW can be purchased through iTunes, and on CD through Amazon and with any luck, your own retailer.

Nice to post about this record and this band. TBW doesn't get enough credit.