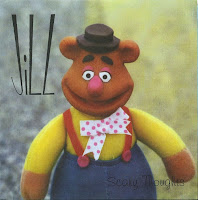 I know that a significant portion of you are going to be put off by this blatantly goofball record sleeve.  Unfortunately, that's entirely your loss, especially if you have a sweet spot for early Green Day.  When this lil' slab of wax dropped in 1995, the world didn't exactly require a band like Jill, if only because Tre, Mike and Billie hadn't gone the Broadway route yet.  Then again, I should also factor into this equation that Jill weren't alone in their reverence to Green Day, because at the same time a handful of other "protege" bands were gaining some traction, specifically MxPx, Zoinks! and Bracket - often beating the trio in question at their own melodicore game.  Such is the case with Jill's "Scary Thoughts" which could pass for a 39/Smooth or Kerplunk outtake in a heartbeat.  Da bomb. IMO this tune surpasses just about anything in GD's Warner Bros catalog.  As for the flip,  "Dumbfounded" starts things off on a mellower note - that is until it bursts into power chord overdrive around the one-minute mark.  Evidently, Jill called San Angelo, Texas home.  Would love to know if there was more where this came from.   I'm dedicating this entry to one Eric Zoll, in hopes that he is alive and well.

A. Scary Thought
B. Dumbfounded

Jill also released a cd ep and a split 7" with true zero. They had some kick ass other tunes before that I don't think we're ever released and the band eventually morphed into Quimby. I'm not sure if they released anything proper but Danny who handled guitar/vocal duties went on to The Fall Collection and now Gentlemen Rogues who just released some tunes. I can get you the cd and split if you are interested.

Sorry about the screwy comment above - typing from my phone. What I meant to say was that Jill had some awesome tracks that I don't think we're ever released so,e of which they carried over to Quimby. I have some demos from Quimby but again, I don't think they released any songs properly. A shame.

They also did a kick ass cover of I've Got A Match by They Might Be Giants as well as Come On Eileen.

Man, this stuff takes me back to some awesome times.

Hey Alan. Yeah, I'd love to hear more by Jill/Quimby. Shoot me an email through my profile. Brings me back to happy times too. Had so much fun mail-ordering $3 singles through ads in MRR back in the day. Thanks for commenting.

Yeah I have the True Zero split as well. I want to say I got it from Coolidge Records but it's been so long...

I love the cover. And I can't wait to get to a real computer and download the tracks to listen to. AND they recorded a TMBG cover?!? I gotta track that down too... Thanks!

Ok, let me get that stuff ripped. I'm pretty sure I have the tracks from the split 7" ripped already (I was in True Zero after all). I may have an extra copy of the CDep if you actually want to own it as well.

Goofball. Green Day. OK, you're singin' my tune. Can't wait to check it out.

Alan, I actually might have the split with True Zero. I'll get back to you tomorrow. Thanks.

Hey Alan. I have the split with True Zero after all. Guess I don't know my own collection. Please let me know if you come across another copy of the CD you mentioned. Thanks.

the Jill Scary Thoughts 7", I had the pleasure of catching them twice when they ripped through Las Vegas, it sucks their van broke down their first time through

Hey my dad was in that band, pretty awesome stuff.

This thread died. I have a collection of Jill's music and Qiumby. I saw them in the 90s. They played my small town of Coolidge, AZ. I have a record called Just like Fonzie. I do really need the true zero split. I have this 7 inch scary thoughts. Hope all is well. This is my first post to this blog.

Hey - you have any Jill stuff besides the 7", split tracks, AYA, and Fonzie EP? I guess anything unreleased or from a demo? Also what does Quimby sound like? I'd be interested!

Today's your lucky day Marc. Here's a link to files of "Just Like Fonzie"

And some Quimby demos: http://www88.zippyshare.com/v/nffTDmC7/file.html

Gary chitwood.yeeaa Gary americant.I got that Jill cassette still that I got from you back in the day. But was just remembering you got a CD for me. Ha

Gary chitwood.yeeaa Gary americant.I got that Jill cassette still that I got from you back in the day. But was just remembering you got a CD for me. Ha

Hey Max when was that? Where was it I gave it to you. Too funny I still search for the real copy of the ep and can never find it.