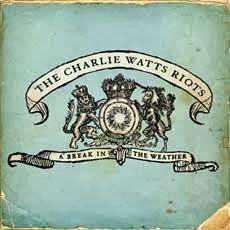 Maybe it's just me, but power pop in 2013, doesn't strike me as indiscernible as power pop from say ten years ago...or even twenty.  Fans of this three minute, three chord form are a pretty traditional lot when you think about it, and while I've opted for a more avant strain of the genre over recent years, those with a penchant for power pop purity meshed with big, plump guitars, will do just fine (if not better) with the second album from Albany, NY's Charlie Watts Riots.

And speaking of your penchants of choice, the Riots have serious hero-worship for the likes of Superdrag, Fountains of Wayne, and Super Deluxe.  The trio's modus operendi is keenly rooted in fore-bearers Cheap Trick, but the aforementioned comparisons make that something of a no-brainer, eh?  A Break in the Weather's vivacious opening salvos, "Bottom" and "Luanne" unveil CWR at their most flattering and incisive.  The remainder of Break, while not always as euphoric, is at least doggedly consistent - that is if you enjoy your power pop as linear and straightforward as the group is wont to dole it out.  Then again, this album is made by traditionalists for the traditionalists...and I believe you know who you are.  Hear the Riots in all their hook-ridden glory over at their Facebook page.  A Break in the Weather is available on CD, iTunes and Amazon.