Lost Luggage - Synchronous Ownership and the Consumption of Cake ep (1985) 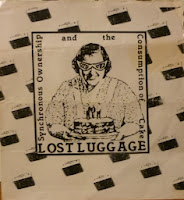 When I learned that Lost Luggage were responsible for a DIY ep that way predated the Chateau Relaxeau cd I shared with you last year, I knew that my only hope in fetching one for myself would be to go straight to the source.  I was a lucky man, because former L/L drummer Andy was able to accommodate my request completely, and now I've decided to let ya'll listen in.

If the aforementioned Chateau... was a product of streamlined, '90s alt-rock engineering, Synchronous Ownership... logically skewed to the collegiate-pop tenor of it's own era.  Lost Luggage was a trio at the time of this recording, and featured but two members that would carry onto the quartet incarnation of the group, upon relocating from Chicago to Los Angeles by the early '90s.  In a nutshell, the three-piece set hadn't gone the power chord route just yet, instead settling on strummy and jangly pop, with an occasional bent towards REM.  "Painting the Masses" is the real keeper here, with the jaunty "Laughing Alone" (it's jaunty rhythm perhaps informed by the Smith's "Rusholme Ruffians") folllowing up at a close second.  Still cutting their teeth on these six layers of Cake, Lost Luggage were creating some highly substantive tuneage in the process.  A hearty thanks to Andy for setting me up with everything.

That other Lost Luggage recording had "Everything Breaks" which is an astonishingly great track.

I can't wait to hear this, and if it is more relaxed and REM-ish that might actually work better overall for me.

But, gawd, is "Everything Breaks" fantastic in its intensity!

Thanks, I'm eager to hear this. "Everything Breaks" has been getting lots of play since you shared the album.

I've had yesterday's post for a long time, but it's been on my mind to dig it out and play it since I recently bought the expanded soundtrack CD + DVD reissue set of the film that first alerted me to the existence of those guys back in the '80s. I'm still digging many of the cuts from the rarities comp you shared. Thanks again for the glitch-free repost of that one, as I'm sure I will never run across a copy of my own to buy.

Looking forward to the third Little Hits comp. I completely missed that blog while it was around.

Glad you're enjoying the LL stuff. "Everything Breaks" is about as perfect as it gets. For true.

Glad I could help Eric. Didn't realize they expanded the soundtrack though. Hmmm.

FYI, Avast flags this as a threat. Any workaround to get to the file without warning bells?

Excellent post , but the link is dead.
Could you please re-up the album?
Thanks and congratulations for the blog.
Jose

Could you please re-up this one?