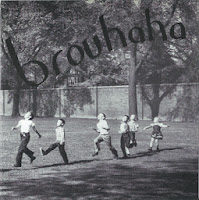 Even though Jawbreaker were the only participants on this micro-compilation to gain something of a national foothold, Brouhaha scores well above-par in the consistency department, even two decades-plus after it's initial release.  In fairness, in 1990 I wasn't aware of this records existence or the four Bay Area bands that populated it.  When Broken Rekids was kind enough to reissue it in '95, Jawbreaker was the undeniable draw for me.  By that time, they had been whacked and blighted with a fat major label deal and a monstrously, over-produced album called Dear You, so imagine my relief when I heard "Caroline," a thoughtful ballad-esque piece with a lo-fi heart of gold.  It would later appear on JB'a odds and ends album, Etc., which I thoroughly endorse.

The contributor that I have my second-most familiarity with is Cringer, who featured frontman Lance Hahn, prior to spearheading J Church throughout the bulk of the '90s and beyond. Though Cringer had plenty of originals to their credit, they opted to cover "Razors," a hardcore punk slammer by Monsula,  a combo who happen to appear on side one with a remake of their own, "Cottleston Pie."  Winnie the Pooh be damned.  I don't come equipped with a great deal of first-hand knowledge on Monsula or Nuisance, but I've heard records by both which left a decent impression on me.  This rip was taken from the 1995 reissue on Broken.  I'm sure the first pressing on Piggly Wiglly could fetch a handsome buck or two.

One interesting thing is that Monsula and Cringer cover each other's songs. Monsula's version of "Colelston Pie" was originally on The Thing That Ate Floyd dbl LP comp.
Nuisance is amazing. If you get a chance to check out "Sunnyside Down" you will not be disappointed. They unfortunately were a mix of southern rock (maybe only saying that because the cover "Brown Eyed Girl on their first LP) pop punk, stoner and fuzz to never really catch on to the standard Lookout Records buyer or, because of the connection to Lookout, never turned the ear of those that would have really dug their tunes.

Thanks for clarifying Tony. I actually have the CD reissue of Floyd, so I should know that. I'll check that Nuisance album out. It might have been the one I heard a few years ago. Anyway, thanks again.