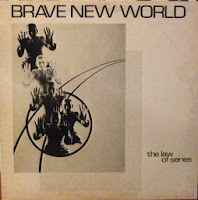 Had a request for this one.  Brave New World were presumably hatched in east Pennsylvania, if the address of their record label World Records is an accurate gauge of their locale, that is.  During the Reagan era, every burg in the nation had at minimum one combo to their credit who gracefully tried to bridge the great new wave/AOR divide.  The Cars were the unflinching masters of this often tricky compromise, but you didn't necessarily have to sound like the Cars to score a run in the same ball park.  It's that ball park BNW opted to play in, and The Law of Series bears a genuine grand slam in the form of what was certainly the quartet's signature piece, "Brave New World," propelled on the pitch of humming synths and tingly arpeggios.  The guitar-driven "Moonlight," and "You Said, You Said" serve as a single and a double, respectively, but "Transistor's" cheesy sci-fi motif (with achingly fitting sound effects) qualifies as a bunt at best.  I'm providing a video for "Brave New World" below, just before the tracklist.  Enjoy (or not).

Now come on, how in the world to I have this already if not from you?

(You don't have to answer this. It'd be scary if you did, really.)

Madison, WI had The Other Kids.
Pretty similar sound!
http://www.youtube.com/watch?v=wjCVr9jNOik

Yeah, I have some stuff by the Other Kids. Cool band,

Can you re-up this, please? Thanks.

Hi
The link doesn´t work. Can you re-up again, please?
Thank you so much