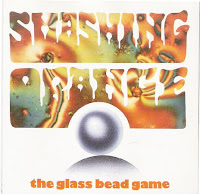 When their debut album was released in 1992, Delaware's Smashing Orange had the misfortune of contending with a slightly more popular Smashing band making waves at the same time, who's moniker also coincidentally referenced an orange fruit. At any rate, The Glass Bead Game is an excellent album of domesticated shoegazer rock, just as engaging as anything by contemporaries The Swirlies and Drop Nineteens. Whipping up a dense, mini-maelstrom, Smashing Orange's tuneful noise had an almost hypnotic effect on those that subscribed, however their booming, echoey mineshaft approach was potentially alienating to more sensitive ears. "Wired," and "All Girls Are Mine," embellished with Rob Montejo's androgynous vocals, are sonically grandiose, and it's shame that little more came on the heels of this album.


A year later the quartet inked a deal with MCA a year later, resulting in 1994's No Return in the End, an unrecomendable generic alt-rock album that exhibited no antecedents of Orange’s impressive previous efforts. Sure enough, it tanked. Smashing Orange also put out two eps, preceding Glass Bead Game, that were reissued a few years ago on the posthumous 1991 album on Elephant Stone Records.

Here's a good story for ya! Back when I was working at Caroline Records in 1990, I tried really hard to sell the boss on signing these guys based on the demo that ended up being the first EP. Rob worked at Bert's in Wilmington at the time and my friend Chris (last I knew was at Other Music) was the manager. The boss liked the tape, but told me that we would be releasing another band with Smashing in their name. I thought this other band would be a flop (which is why I was never in A&R!)

I still think the earlier stuff is a bit better, but both records are great examples of American shoegaze (I hate that word!)

Good one Eric! When ever I played this album to friends, they would always respond by informing me that there was a band called The Smashing Pumpkins...as if I was from Mars.

This is interesting. I'm in a band that was on Elephant Stone and I actually urged our label, and Rob, to re-release the stuff that preceded "The Glass Bead Game." This album was mostly comprised of an incredibly ahead-of-its-time e.p. called "Above Ming Gardens" (Ming Gardens was a little chinese restaraunt in Delaware and their studio space was located above it).

Rob is a very close friend and has long dealt with a great deal of scrutiny based on his confidence. They were perhaps too arrogant, but they were young, good looking, and absurdly talented. People never got over his his youthful arrogance. I still hear people say shit like "fucking Mick Jagger mother fucker" and "ooooohhhhh.... it's Mister Montejo...." behind his back when he is setting up to perform, trying to mock him. It's fucking retarded.

In any case, if you want to hear them at their best, check out the Elephant Stone myspace page and listen to the song "Whenever," because it's as good as song as any from that time period. A really beautiful piece of work...

I'm actually a new listener of smashing orange. thanks for posting this!

I could listen to these guys all night...as a matter of fact, I have been...:-D

Anyway, I thought I'd leave this: