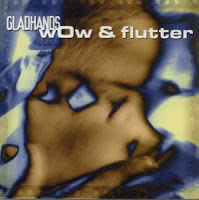 Chapel Hill's Gladhands, were an exemplary power pop trio who released two smashing albums on the venerable, but sadly departed Big Deal Records - From Here to Obscurity in 1995; La Di Da two years later. Neither records met with anything resembling mainstream success, but were highly lauded among the band's devotees. When it came time for album three in 1999, Wow and Flutter, Big Deal were on the cusp of bringing it to market, but when the label was abruptly bought-out in mid '99, the album was temporarily put on ice. Promotional copies made the rounds to the usual suspects (i.e. radio, print media) just in time however, making it a minor collectors item. To my knowledge, only the Japanese enjoyed an official release of this disk, but import copies were available stateside, at a rather steep price I might add.


Admirers of bands like Owsely, Tubetop, not to mention a good chunk of the Big Deal roster will revel in Wow and Flutter, despite it's somewhat slick leanings. This was to be the Gladhand's last hurrahs, excluding a couple of post-mortem archival releases. In fact, their departure is written all over Flutter's "Get Real," making for a fitting, if not bittersweet coda.

Excellent power pop albums that didn't get the attention they deserved in the Nineties! Thank you!

By the way, the second album, La Di Da, can be found on this blog: http://my.opera.com/walknthabass/blog/gladhands-la-di-da-1997

Awesome download. I've never heard of these guys. Thanks! Also, thanks to David for posting the blog with the older release. Does anyone know where I can download their other album? That would be great!

Many thanks! There other two albums are great. Never been able to track this one down...