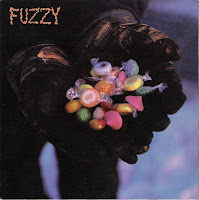 Fuzzy's finest moment came on this genius single, a gleefully exuberant slice of power-chord pop that brandishes more hooks in three-and-a-half minutes than should be ordained by law. Seriously. This Beantown co-ed quartet were one of many '90s major label casualties, signed to "boutique" indie labels, (in their case, the Atlantic Records marketed Seed Records) that really didn't garner the national exposure their intended "best of both worlds" strategy was mapped out to. The Velocity-Girl-esque "Flashlight" was the first, and only single for Fuzzy's '94 self-titled album, their most satisfying if I may say so. Their like minded 1996 followup on Seed, Electric Juices, failed to put them over the top either, and they were presumably dropped, after eking out one last hurrah in the form of the independently released Hurray For Everything in 1999.


This here single offers a couple of non-lp numbers on the flipside, including the appropriately dubbed "Country Song," which sports a decidedly 'Americana' bent. As always, enjoy (or not).
A. Flashlight
B1. Thurber
B2. Country Song
https://www34.zippyshare.com/v/vEzPiMEt/file.html
Posted by spavid at 2:41 PM

Thank you for this! My cd of Fuzzy's eponymoius debut is missing and "Flashlight" is the song I miss the most. It really brings me back to 1994.

This just came on at random and wanted to make sure I got back to say thanks. VG indeed.

Got to see them at a reunion show a couple years ago and they were awesome!

Had this song in my head today and was searching all over for it. Figures I would end up here :)

Would love to hear the non-lp songs... a re-up would be appreciated.

This is Fantastic! Thank very much!